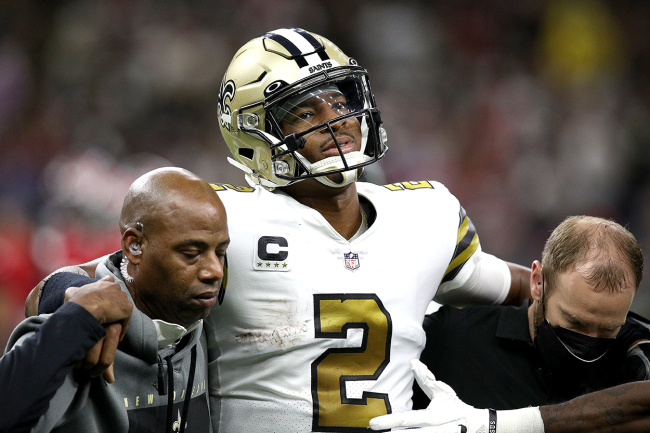 Jameis Winston is seven months removed from surgery on his ACL. As the New Orleans Saints quarterback continues to recover, a new report has fans speculating about a potential blockbuster deal.

According to head coach Dennis Allen, the plan is for Winston to start in Week 1. However, according to Nick Underhill of NewOrleansFootball.com, the former No. 1 overall pick is playing with a visible limp.

Now, obviously, Winston is still on the road to full health. It is only May and the season does not officially begin until September. There is plenty of time for the Saints’ hopeful QB1 to get right.

Should he not be able to go by then, which is seems like he will, Andy Dalton and Ian Book would be the next two quarterbacks in line. There is also another option — trading for one of the quarterbacks currently on the block.

Baker Mayfield and Jimmy Garoppolo are very available, should the team decide to make a deal for someone to step in until Winston is ready. Some NFL fans are trying to speak it into existence.

Baker gonna be a saint. https://t.co/bx6rul6qlz

Again, it is still very early on in what is typically (at least) a year-long rehab process. Winston is recovering from a very invasive surgery and a limp may not be an indicator that it’s time to hit the panic button in New Orleans.

Still normal at this point considering the reconstruction he had. It’s normal for many with post ACL to still limp around after physical activity https://t.co/PbmGBaEQKV

With that being said, it is something to keep an eye on. Should Winston continue to limp into the preseason, then it might be time for the Saints to explore their options if they are not comfortable with one of the two guys behind their top quarterback on the depth chart.