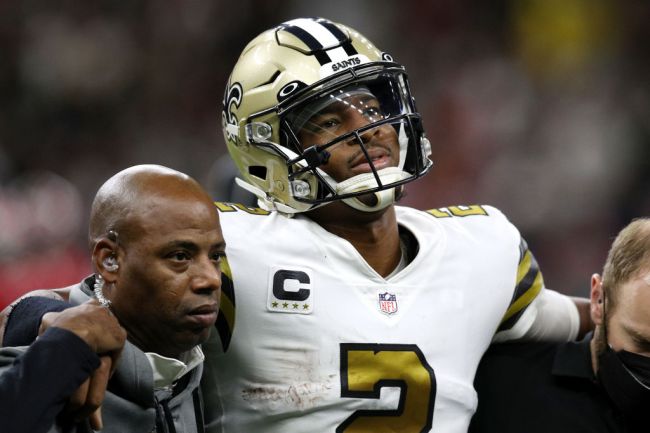 Jameis Winston is done for the year after reportedly tearing his ACL during the Saints’ win over Tampa Bay on Sunday. New Orleans’ head coach Sean Payton told reporters following the game he feared the injury was “significant” which is exactly the case.

Winston was in his first season as the Saints’ starting quarterback and will finish his 2021-22 campaign with 1,170 yards passing, 15 touchdowns, and three interceptions to go along with a QB-rating of 64.1.

#Saints QB Jameis Winston does, in fact, have a torn ACL, source said after the MRI. He is out for the season. There is also damage to the MCL.

Winston left Sunday afternoon’s game against Tom Brady and the Bucs before Trevor Siemian checked into the game going 16-for-29 through the air and throwing one touchdown in New Orleans’ 36-27 win. Taysom Hill will surely get snaps at quarterback as well moving forward for the Saints as he is expected to return soon after suffering a concussion earlier this season.

Despite leaving the game and being on crutches inside the Saints’ locker room, Winston’s spirits were still high following his team’s win as a video showed him dancing with his teammates.

Most NFL fans were sad to hear the news of Winston being done for the year.

Hope he gets another shot if not here then somewhere else. This sucks. We always rocking with you @Jaboowins https://t.co/wyQuAaalKw

Aye, this hurts my heart man! Love my QB1, and I know he's coming back better than ever. Still wanted for him to continue proving these doubters wrong! #WhoDat #WinForJaboo 🤞🏿💯⚜ https://t.co/D9UdUgxshh

Man. Feeling so gutted for @Jaboowins. Wishing him nothing but the best for his recovery. Can't wait to see him cook in 2022! https://t.co/7XGiyw4aWz