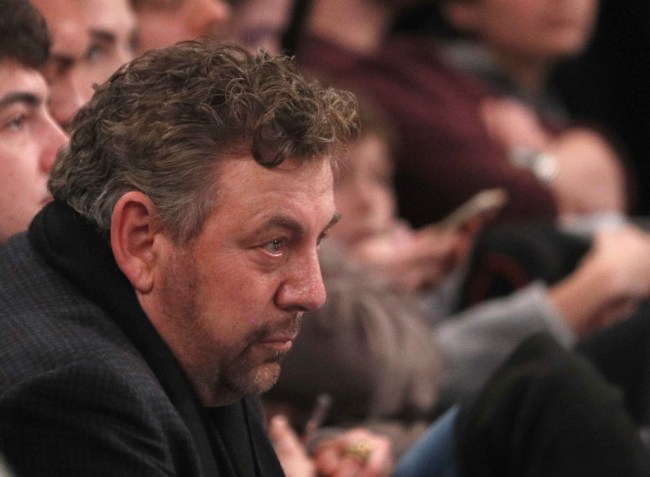 In 2018, the Philadelphia 76ers found themselves at the center of one of the more bizarre scandals to hit the NBA in recent memory when their former GM Bryan Colangelo was sent packing after internet detectives linked his wife to a number of Twitter accounts that were dedicated to ripping into the team.

The NBA is no stranger to burner accounts, as Kevin Durant got busted for using one to clap back at trolls (and fire a shot at Billy Donovan) in 2017 before deciding to just use his personal Twitter to engage in petty feuds with random fans.

Now, we have some fresh burner-related drama on our hands courtesy of a new Twitter user going by the handle @DalyJohnathan, who joined the platform earlier this week and has since spent a sizeable chunk of time being the only person in the world to come to the defense of Knicks owner James Dolan.

Dolan has overseen operations in New York since he was given control of the team in 1999, and since then, he’s done seemingly everything in his power to run the Knicks into the ground thanks to the laundry list of impressively boneheaded decisions he’s made.

The Knicks are currently sporting a 5-20 record after making close to no effort to acquire any big names from a stacked class of free agents over the offseason (you know you’ve done something wrong when Julius Randle is the best you can do) and are well on their way to yet another waste of a  year.

As a result, it would seem odd that any rational Knicks fan would be in Dolan’s corner when you consider he’s largely responsible for the franchise’s struggles, but Mr. Daly seems to be all-in when it comes to the owner’s vision based on the dozens of tweets he’s sent out over the course of the past day.

Knicks fans should be thankful for an owner like Dolan.

That’s completely false. James Dolan has had to overcome a lot in his life and is a solid owner. I am a Knicks fan and am thankful for Dolan.

I am a Knicks fan and I hope he owns the Knicks forever too! He gets a lot of flak but he is a solid owner

Coaching is definitely the problem – not James Dolan. He is the only one that knows what their doing in the entire Knicks organization!

The user also repeatedly suggests Dolan is not the problem but rather the people he’s surrounded himself with, which conveniently ignores the fact that he’s in charge of who he surrounds himself with.

Of course, there’s no proof this is actually Dolan but I like to think it is because I’m slightly frightened to think there’s anyone in this world that would devote so much of their time to going to bat for him.