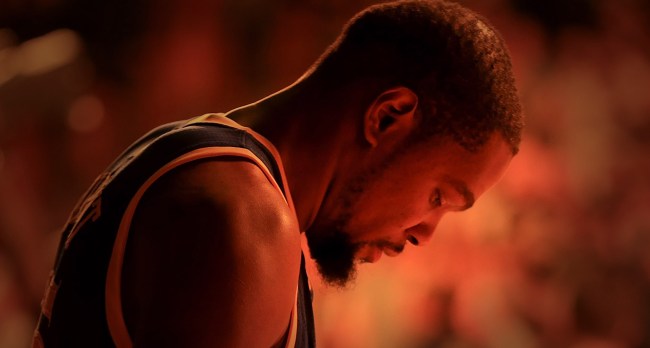 On Tuesday, in a new interview with J.R. Moehringer of the Wall Street Journal, Kevin Durant did a lot of complaining (some of it justified, some of it not so much) about his time in Oklahoma City, his time with the Golden State Warriors, and well, his time in the NBA.

Durant also said, that despite winning two NBA championships and two NBA Finals MVP Awards in his three years with the Warriors, “it didn’t feel as great as it could have been.”

Naturally, because NBA fans know Durant has rabbit ears when it comes to social media, he checks his direct messages twice daily on Instagram, according to the interview, and because he WILL respond when he thinks he’s being unfairly criticized, they’ve come out of the woodwork to criticize and bait Durant about some of what he revealed in the Wall Street Journal interview.

“…the bitter parting with Oklahoma City brought hidden boons. “It made me realize how big this whole shit is,” he says. The “shit,” he says, is “the machine,” a great big invisible generator of narratives, programmed by the powers that be to gin up controversy, conflict, whatever keeps people dialed in. He’s learned — he’s learning — to free himself from the machine, to separate the game he loves from the noise and nonsense surrounding it.”

As evidenced below, Durant appears to still be having a hard time “freeing himself from that machine” and the “nonsense surrounding it.”

See that’s your problem my g. U thought we were dating lol. That’s creepy

U want me to see you, I see u my son. Now go flourish with that clout u received

Will, if a reporter asks me a question about a particular topic. I’m gonna answer, it’s that simple

You didn’t have to read it

No, I won’t just ignore 8 years of my career because will and his friend don’t like it

I can feel how I want about it too. 🤷🏾‍♂️ it’s not harming u, you’ll be aight tomorrow

Bro maybe I just like Twitter. It could all be so simple but u wanna take it there