Kevin Durant Defended Devin Booker’s Double Team Outburst By Getting In A Twitter Argument With A Random Dude, Naturally 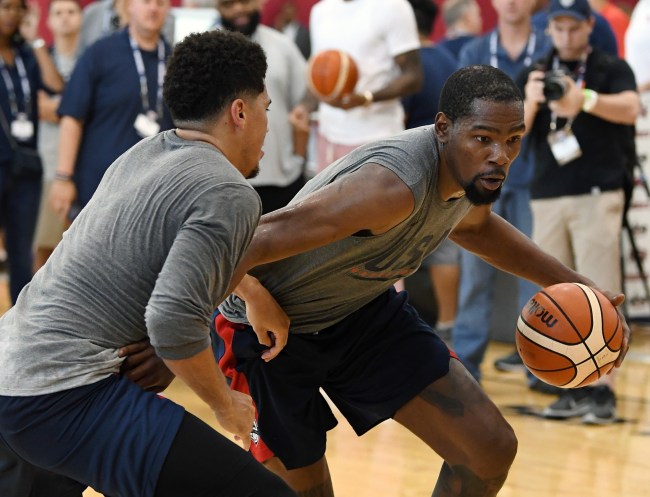 You know it’s the dog days of the offseason when Devin Booker getting double teamed in a pickup game sparks a two-day existential debate.

But we can’t change time, so lets overreact to it.

Yesterday, we brought you the news of the 22-year-old scoring machine getting salty about being double teamed in a pickup game that included Ben Simmons, Joakim Noah, Tony Snell, and some others.

“Hey bro we not doubling in open gym. I get that shitt all season. Come on man. Let’s work on our game,” Booker said when a second defender aggressively came to trap him in the corner.

“Hey bro we not doubling in open gym. I get that s–t all season. Come on man. Let’s work on our game.” – Devin Booker at an open run. 🗣🗣🗣 (via @swishcultures_) pic.twitter.com/8hgKFLo4ak

On Wednesday, Kevin Durant, one of the handful of scorers in the league who eclipse Booker, defended the young millennial by getting in a long-winded Twitter argument with a random dude. Stop me if you’ve heard this before.

So you need another man to help u check your matchup?

You matchup with your position. U need double teams all game? In pickup? Cmon now, what we doing?

GUARD UP! It’s pickup, if u weak defensively then work on it in the summer cuz if u need a double during the season then coach sittin u on the yine

Defensive rotations?? In pickup 😐. Give it a brake

Stop him. If u can’t then come back tomorrow.

Obviously Dbook just wanna work on his shit. U can’t score like that so u can’t relate, that’s why I’m here to bridge the gap

U wouldn’t ever be on the court with Dbook, don’t even stress my g, u good

First off book averaged 7 assists this season so he obviously knows how to make the right play but it’s pickup, if Jo wanted the stop he should’ve guarded him before they checked the rock. All one on one fades in pickup. Maybe some help at the rim

Lol all I know is that man is a certified bucket and he can make the right plays. His teammates love him and he’s a dog. That other shit for the birds

Andre Iguodala chimed in from the bleachers.

If we would’ve did that shit at Rico Hines run I would’ve went back to Malibu.

Now Trae Young? Shouldn’t these dudes be out on a yacht drinking champagne? This is for us losers in life to debate!

DBook speaking facts… There should be NO Double Teaming in pick up💯 When you trying to work on your game, and work on the moves and things you do individually in pick up… it’s annoying getting double teamed in that type of setting🤦🏽‍♂️ Just Sayin.. #OnlyAFewUnderstand 🤣🤣

Devon booker reminds me of a young Kobe. I don’t disagree with him not wanting to be doubled in a pick up game. But on the other hand if he’s gonna be In the situation during the season he should accept that challenge in the off season. It’s a sign of respect.

Gilbert Arenas took the opportunity to teach Booker a life lesson while also showering praise on himself. Booker responded to Agent Zero’s criticism and has officially convinced me that his double-team outburst was warranted.