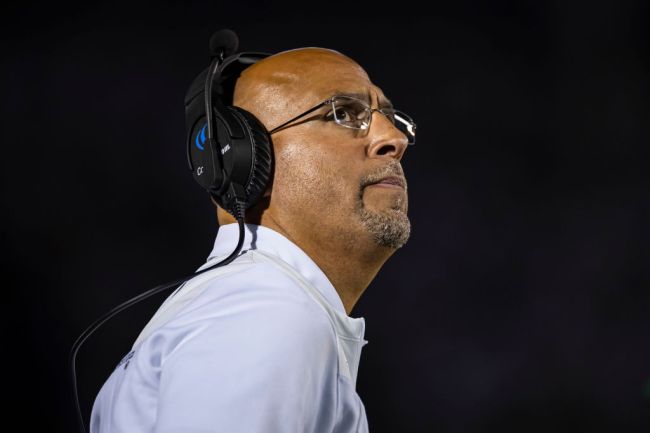 James Franklin’s name is being mentioned not only for the USC head coaching job but for the LSU coaching vacancy as well. Add all of the rumors to the news that he just switched agents to be represented by Jimmy Sexton plus the fact that his Penn State team is coming off of back-to-back losses, the man has a lot going on at the moment.

And it showed during his Tuesday press conference.

According to Allie Berube of ABC, Franklin misspoke not once, but twice, about his Nittany Lions preparing for Illinois this week. That isn’t the case seeing as how Penn State lost to Illinois just a few days ago. The Nittany Lions play visitor to Ohio State this weekend.

He also misspoke when talking about Ohio Stadium and called it The Big House, which of course is the nickname for Michigan’s football stadium.

There’s clearly a lot of pressure on James Franklin (coaching rumors, back to back losses).

He’s misspoke twice today calling the next opponent Illinois (when it is of course, Ohio State), and called the stadium The Big House (when they play at The Shoe on Saturday).

People misspeak all the time, but Franklin is typically one of the more put-together speakers and presenters in all of college football. When he steps to a podium, he’s more often than not focused on the topic at hand.

You could chalk this up to Franklin being a little worked up given his team’s back-to-back losses or perhaps he’s got his sights set on moving to Los Angeles or Baton Rouge in the very near future. It could also be a combination of both.

Franklin will be looking to shutting out any outside news heading into Penn State’s trip to No. 5 Ohio State on Saturday. That’s certainly easier said than done going into a pivotal game coming off of two straight losses and perhaps thinking about your next move as a head coach.