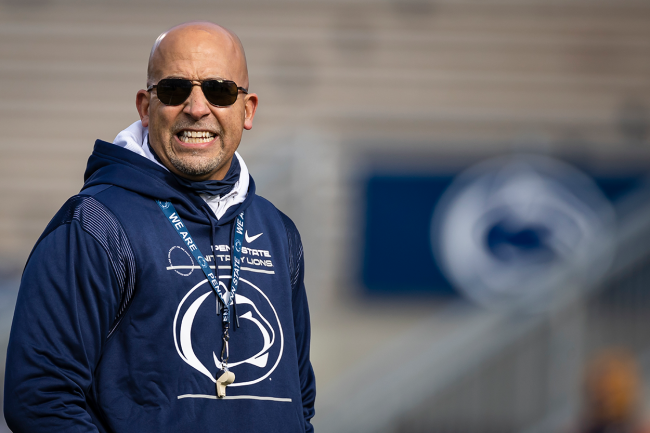 Penn State football shutout Rutgers 28-0 on Saturday and James Franklin just wanted to talk about the win. However, after the game, one of the first questions he was asked was about his comments earlier in the week.

As the college football coaching carousel continues to spin, Franklin’s name is heavily in the mix. It is believed that he is a top candidate for the Southern California opening and he has not instilled much confidence that he will be in Happy Valley next year.

That was not the case earlier this week. Franklin spoke at Penn State’s QB Club and gave his firmest declaration yet.

He stood up and definitively said that he was “not going anywhere.” The crowd of about 200 gave him a rousing ovation.

Following Saturday’s win, someone asked Franklin if his statement was true. In response, he gave a very interesting answer.

At first, he said that he’d “like to talk about Rutgers.” He then followed up by saying that his comments at the QB Club came because he “thought something was going to happen a little bit sooner.”

Could that be an extension with Penn State?

Franklin then went on to say that he gets why the question was asked, but that he would rather talk about those types of rumors on Tuesday. The manner in which he responded was confident, but also defensive.

It was a very interesting dichotomy. Take a look:

Let’s break this down:

“I get it, and I understand the question,” he said. “Like I’ve tried to tell you guys before, these things are much more complicated than just simple yes and no answers. And with me, I just am always trying to be as transparent as possible and tell you guys what I know. When I say something, it’s going to happen.”

With the win, Penn State moved to 7-4 on the year. Franklin and the Nittany Lions will close out the regular season against Michigan State next weekend.

Before then, we will have to see what happens on Tuesday. Is Franklin really staying at Penn State?!