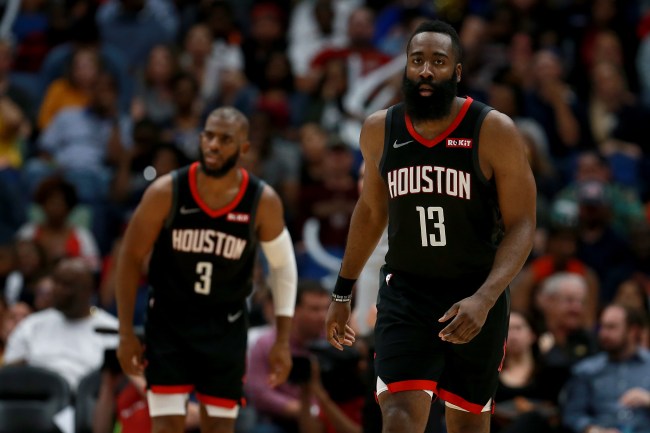 For the past four out of five years, the Golden State Warriors have buried the Houston Rockets in the playoffs. I can’t imagine the strain that puts on a team. After the Rockets surrendered to the Warriors in Game 6 on the Western Conference semis in May, reports began to circulate about a “tense exchange” between Chris Paul and James Harden, centering around Harden’s proclivity to play hero ball.

Things have been quiet since, but one’s gotta think that another playoff loss to the Warriors would be devastating beyond repair. ESPN’s Tim MacMahon recently reported that the friction in the between Paul and Harden is tangible, and it’s a sloppy mix of differences between personalities and playing styles.

“Chris wants to coach James,” says a source familiar with the stars’ dynamic. “James looks at him like, ‘You can’t even beat your man. Just shut up and watch me.'”

According to sources, Paul was also frustrated by what he perceived as Harden’s tendency to ignore unglamorous details that impact winning — such as moving when he gives up the ball to help spacing — and wasn’t shy about expressing those concerns.

What’s more is that Paul reportedly yearned for the times when the best isolation player in league history was on the bench.

It has reached a point, team sources say, where Paul cherishes the chance to play without Harden on the floor. On several occasions, according to team sources, Paul barked at D’Antoni to keep Harden on the bench while he was running the second unit. Harden simultaneously would lobby — or demand — to check back into the game.

ESPN reports that the Rockets were statistically better during the regular season with Paul on the court without Harden (plus-9.2 points per 100 possessions) than with them together (plus-5.7).

These two have got to figure it out, as it’s a near certainly they’ll be together for the foreseeable future. The Rockets still owe Paul $124 million over the next three years (despite Paul reportedly wanting out of Houston) and the Rockets would be foolish to trade Harden. Next season is make or break.