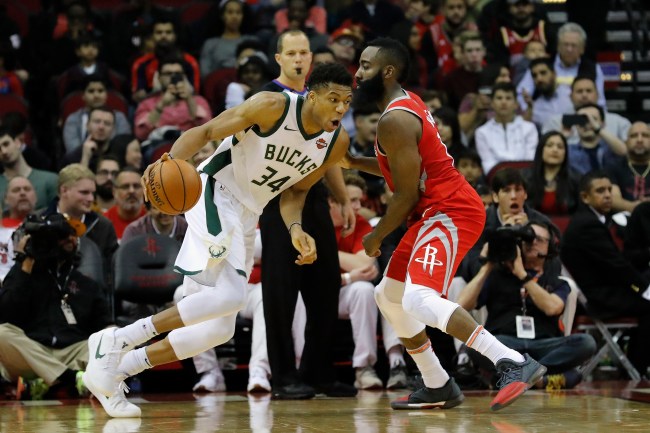 James Harden must wake up every morning, take nine steps, and immediately feel like the most disrespected superstar in the league who doesn’t have nine burner accounts.

His average per game stats this season : 35.2 points (1st), 6.4 rebounds, 7.3 assists (9th), 1.7 steals. Harden also has a league-leading 254 made three pointers, 34 more than Buddy Hield’s second best, all while leading the small-ball Rockets to five-straight wins and eight of the last 10.

Still, Harden’s reputation to game the game with flops, travels, and cherry-picking hasn’t earned him the respect his numbers deserve. And Giannis didn’t do anything to help that perception following the 2020 All-Star game when he was asked for his reasoning why he chose Kemba Walker to be his point guard over James Harden: He joked, “I want somebody that’s gonna pass the ball, that’s all I want.”

This apparently didn’t sit well with Mr. Harden, who is averaging nearly 3.5 assists more than Kemba this season.

In an interview with Rachel Nichols Friday, Harden brought this point up.

“I average more assists than him I think,” Harden said of Walker. “I don’t see what the joke is. I don’t even see it, I don’t pay attention to stuff like that. I just know none of them can mess with me.”

James Harden addresses the comments Giannis made during the All-Star draft about assists: "I average more assists him than him, I think….I don't see what the joke is."

Later: "But I wish I could just run and be 7 feet and just dunk." https://t.co/vRKMXpr3Wp pic.twitter.com/ecOzFoDsiQ

Harden then blasted a certain 7-footer who doesn’t yet have a consistent jump shot.

“I wish I could be 7-feet, run and just dunk. That takes no skill at all,” Harden said. “I gotta actually learn how to play basketball and how to have skill. I’ll take that any day.”

Giannis: I’m not picking Harden in the ASG because he doesn’t pass.

James Harden being escorted to a Milwaukee prison after dropping 60 on Giannis head and embarrassing him on National TV March 25 pic.twitter.com/8EmnFdHI02

I think it’s safe to say these two don’t like each other.

The next time Harden plays Giannis is on March 25. Will watch.