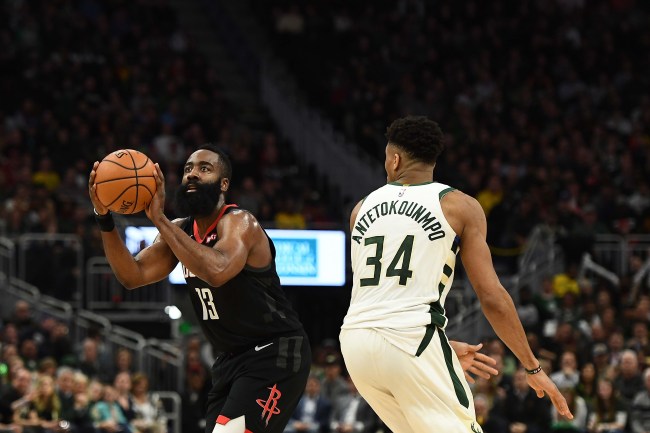 James Harden continues to talk ad nauseam about his Rockets perpetually coming up short of their team goals and how he will continue to work on becoming a better team player, defender, and leader.

Correction: James Harden continues to talk ad nauseam about allegedly being snubbed of MVP honors, despite his Rockets getting eliminated (again!) on their home court to a Warriors team without Kevin Durant and DeMarcus Cousins.

In a recent interview with GQ, Harden spoke about his “legendary” season and gloated over his Rockets being “the best-dressed team in the history of sports.”

You can’t tell me that a guy whose team was a 14-seed at one point last year, and ended up a four-seed with everything that was going on—so many injuries—and who went on a 32-game 30-point streak, eight 50-point games, two 60-point games in one season…and all the talk was about [Giannis Antetokounmpo]? There’s no way.

I just had to look at what I could do to get better for next year. You can’t pout or be mad, and the kid had an unbelievable season, so did his team. But the things I was putting up were legendary. You going to look back in 10, 15 years from now and be like, is that really true? Did that really happen? That’s some stuff they were doing back when Kareem and all those other guys were playing. But I’m happy. We have a team goal of winning a championship, and I’m ready to get going now.

Even if there is truth to Harden’s comments, it’s perplexing how he’s still seems to hold individual goals above team ones. Giannis took a number 7 seed the previous year to the best record in the NBA. It’s not like the MVP went to Brook Lopez. You’d think the richest contract in NBA history would quell Harden’s inferiority complex.