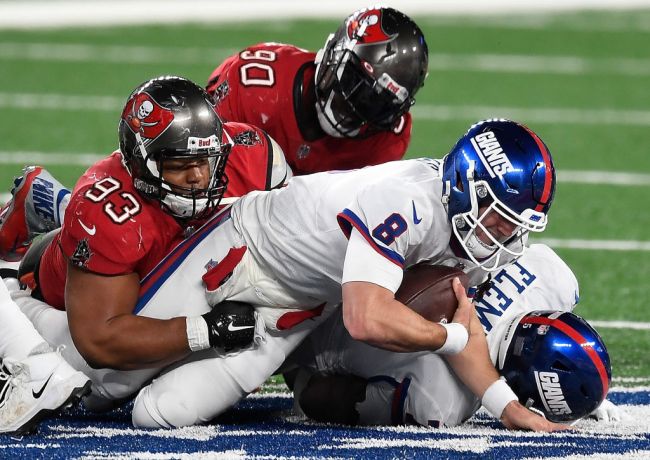 Former Giants cornerback Janoris Jenkins – now with the New Orleans Saints – threw some shade at his former team and “Danny Dimes” while watching the Monday night game against the Tampa Bay Buccaneers.

Jones didn’t have the best night, missing a wide-open receiver and throwing a pick. The second-year quarterback ended the night with 256 yards, 2 TDs, and 2 INTs.

Jenkins posted a photo of Daniel Jones on social media and added the commentary: “A duke QB over Lamar. N wonder y they can’t win.. LMMFAO.”

Janoris Jenkins taking his stab at the #Giants 😳 pic.twitter.com/ZPznTMqzWL

Jenkins is referring to Baltimore Ravens quarterback Lamar Jackson, a player who wasn’t even in Jones’s draft class. The Giants took Saquon Barkley with their first pick in the 2018 draft.

The argument could be made that the Giants needed a quarterback over a running back, but as a Giants fan, I’d argue the Giants need everything at every draft, so picking Barkley wasn’t a bad idea.

Still, Jones is 4-16 as a starter, and the pick is looking more foolish by the week.

Jenkins played for Giants from 2016-2019 but was cut by the team after using a racial slur against a fan on Twitter.