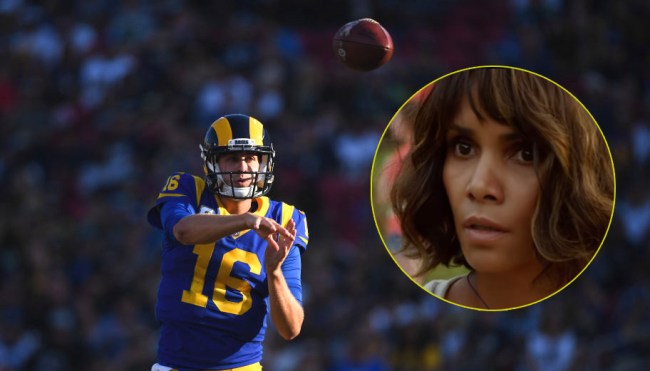 As we pointed out during the 2017 season, Los Angeles Rams quarterback Jared Goff has the best audibles in the NFL. He’s used famous names like Tupac, Ric Flair, Elvis, Obama and more to change plays in the past.

On Sunday, during the Rams game versus the Seahawks it was more of the same, only this time the celebrity being called out by Goff was Academy Award-winning actress Halle Berry.

It turned out that Berry apparently got wind of being name-checked in the Rams game and wanted to know, “What is a Halle Berry?”

After the game, Jared Goff saw her tweet and shooting his shot, as Deion Sanders put it on NFL Network, wrote, “It’s my favorite play ever.”

What we didn’t know about that reply from Goff is that the 24-year-old apparently, and rightfully, “became a giddy kid,” according to ESPN’s Lindsey Thiry, when he found out that Berry had tweeted him.

Goff quickly searched for Berry’s tweet, then grew increasingly animated as he showed it to teammates and coaches.

Goff would not reveal the details of the play but said to check with McVay, who was responsible for naming it. McVay would not disclose why the play was named after Berry, given that the reason is likely tied to the design of the play.

But the coach did say that if Berry was asking, to tell the Oscar-winning actress that it certainly was meant as a compliment.

“She’s a very attractive woman that players know,” McVay said. “And it’s related to the play.”