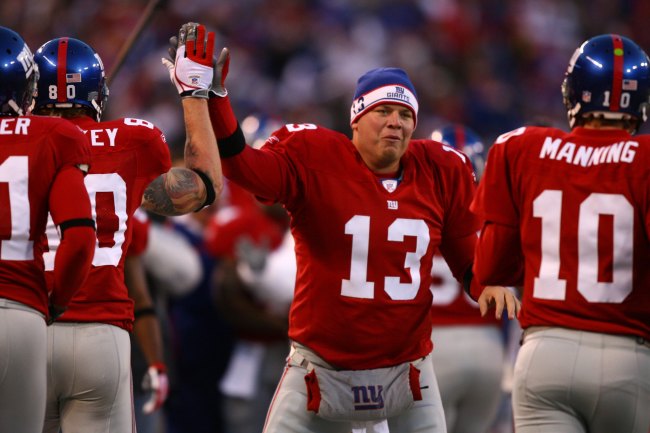 Jared Lorenzen, the 38-year-old former NFL quarterback who most notably played for the New York Giants during their 2007 Super Bowl season, has passed away.

Earlier this week, Lorenzen was admitted to the ICU and was reportedly battling a serious infection, in addition to kidney and heart issues.

Prior to his death, a statement from Lorenzen’s family indicated that the former backup quarterback — who played for the New York Giants and the Indianapolis Colts during his National Football League career — was in Dialysis.

“Jared’s overnight was uneventful and that is a good thing. He remains on Dialysis. He continues to maintain his ground. His cardiac and renal issues remain however his treatment has been effective. Jared is still very sick… but developing some traction and remains a fighter. The entire family thanks you for your support and prayers,” the update read.

Lorenzen’s conditioned worsened following the release of the statement, as his passing was announced by Matt Jones of Kentucky Sports Radio around 4:00 p.m. EST on Wednesday, July 3.

Jones, who was a friend of Lorenzen’s, called the quarterbacking cult hero “a better person than a player.”

“Jared Lorenzen was one of the finest people I have known….a better person than a player. He was a huge part of our KSR family and an even larger part of the BBM family. My heart is broken for his family and friends. God Bless the soul of our amazing friend,” a tweet from Jones read in the aftermath of Lorenzen’s death.

Lorenzen, who was drafted into the NFL out of the University of Kentucky in the year 2004, last played professional football with the Northern Kentucky River Monsters of the Continental Indoor Football League in the year 2014.

The thoughts and prayers of our entire staff are with the friends, family, and various loved ones of Jared Lorenzen during this extremely difficult time.