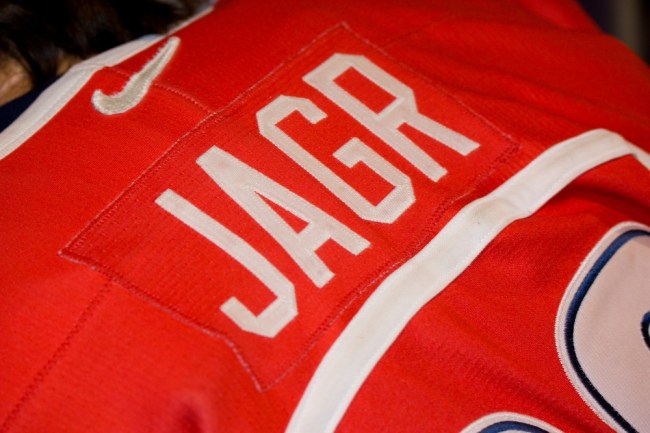 The ’90s were a weird time in America. MTV still played music videos. Michael Jordan was a living legend on the basketball court but walked away from the pine to play baseball. Nickelodeon’s Gak and Floam were somehow the hottest toys for a while even though it was literally just a plastic container of shit that made your hands smell like chemically-spiked baby diapers.

In the ’90s, it seemed like people were willing to purchase anything they saw on TV. It didn’t matter what it was. If Bo Jackson, Michael Jordan, or Jaromir Jagr (?) were selling it then we were buying. Case in point, Jaromir Jagr’s magical peanut butter. I know what you’re thinking ‘what the shit could be ‘magical‘ about a jar of peanut butter?!’ but you just wait and see.

Here’s Jaromir Jagr in the ’90s trying to sell people magical peanut butter and claiming that it fixed his injury after he rubbed it on his private parts. This clip truly makes me sad that Twitter didn’t exist back in the ’90s. People would have an absolute field day with this in 2017.

Jagr was with the Pittsburgh Penguins from 1990-2001 and holds 31 team records including Most career playoff game-winning goals and Most Career Overtime Goals. After the ‘Iron Curtain’ fell and the USSR crumbled, he was the first Czechoslovak player to be drafted into the NHL without having to first defect to the West. He took to the NHL like white on rice. And at 45-years-old, Jaromir Jagr is STILL playing in the NHL today. He’s currently on the Calgary Flames’ roster.