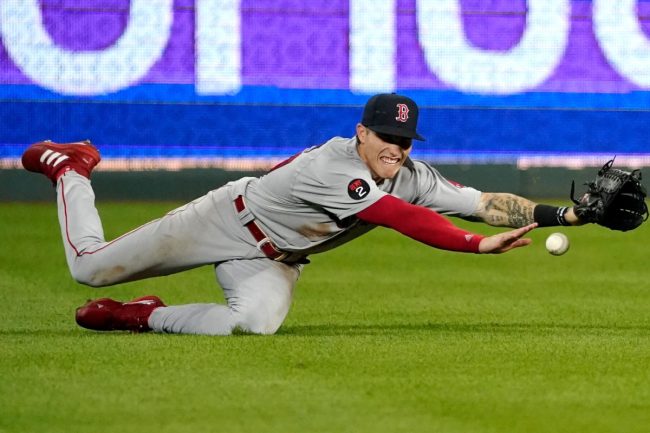 Red Sox centerfielder Jarren Duran had to be held back by teammates on Sunday after getting into a verbal altercation with an opposing fan. The argument came in the midst of a rough inning for the outfielder.

In the seventh inning of play, Duran misplayed a fly ball before having another drop from web of his glove. He began hearing it from some opposing fans after the defensive miscues.

They were just the latest misplays for the defender, who’s been criticized for his play this season. He previously made headlines for allowing an embarrassing inside the park home run to the Blue Jays.

Now, he’s back in the press for his fight with the fans.

Jarren Duran held back in argument with fan

After misplaying the pair of flyballs in center field, Duran began hearing it from Royals fans. He started chirping back, at one point nearly charging to the outfield wall.

His efforts to get to the fan were thwarted by a teammate, who held him back before the situation escalated any further. It’s safe to say Duran let him frustrations get the best of him.

Many around the baseball world were quick to react.

Jarren Duran is having a bad game and here he is chirping at fans pic.twitter.com/RkMeM58kan

Jarren Duran has done everything possible to absolutely destroy his stock over the last month. No excuse for behavior like that.#RedSox | #DirtyWater

Jarren Duran continues to have a rough time in center.

At some point we are going to admit Jarren Duran is not a big league centerfielder, right?

Not a great look for Duran.