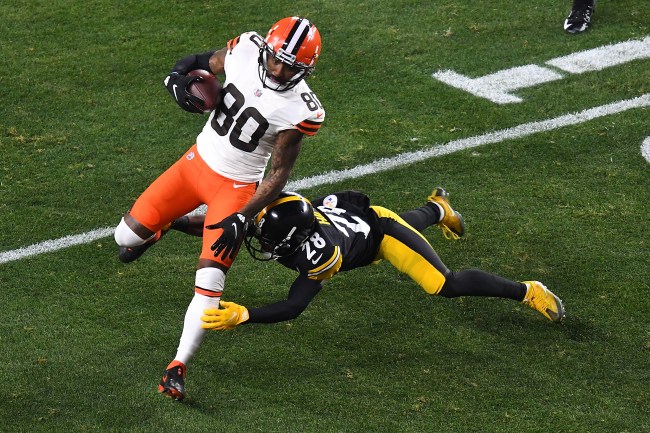 Well that didn’t last long. Just a week after releasing Odell Beckham Jr, the Cleveland Browns have another wide receiver who is upset with his role.

This time around, it’s Jarvis Landry who is voicing his displeasure over a lack of touches. Odell’s LSU teammate and longtime buddy took the time to tell reporters at his yearly Thanksgiving food drive to tell reporters “I haven’t been getting the ball much either”.

#Browns Jarvis Landry on his involvement in, and the state of, the passing game. pic.twitter.com/z93Tm35F7H

He went on to say that he doesn’t know why he isn’t getting targets or why the passing game is struggling. Luckily for Baker Mayfield, it seems like this wide receiver at least isn’t directing the criticism toward him.

Landry went on to praise Baker’s toughness as he plays through a shoulder injury and acknowledged that Baker needs to get healthy. That would make it seem like his issue is with the coaching staff.

The dependable slot receiver is having one of the least productive seasons of his career this year. He has only gone over 5 targets twice this season and has only been targeted 5 times each in the teams two games since the Browns decided to part ways with Odell for a total of 7 catches for 37 yards.

Those are shockingly low numbers for a player who doesn’t really have competition as the Browns’ clear WR1, especially when considering how this weekend’s game played out. The Browns fell behind 17 seconds into the second quarter and trailed the rest of the way en route to a 45-7 loss, but only attempted 33 total passes with 12 of those coming from Case Keenum in the 4th quarter.

The Cleveland Browns coaching staff is going to need to find a way to get their top receivers more involved or we might be hearing from Donovan Peoples-Jones next.