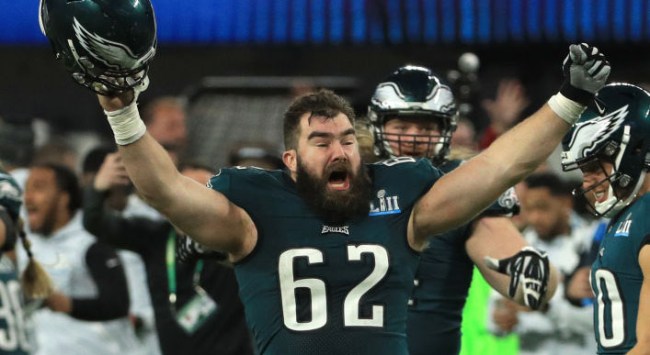 If you thought the outfits some of the Philadelphia Eagles players like Chris Long and Jason Kelce were rocking at the Super Bowl parade were something to behold, that’s nothing compared to how hard some of these guys are going in their celebration.

Kelce, who gave one of the greatest post-game interviews of the year after winning Super Bowl LII, is still in rare form at Thursday’s parade in Philly.

Here’s what Kelce had to say after winning the game on Sunday. Warning: it contains all the feels.

And here’s what Kelce did on Thursday during the Eagles’ Super Bowl celebration parade. Warning: it contains all the F-bombs.

Jason Kelce is high fiving fans in a mummers costume. It doesn't get better than this. pic.twitter.com/Y997Gj6z8z

And here he is having another beer, on the street, next to a cop, giving him his autograph.

Jason Kelce.
Havin' a beer.
On the street.
Next to a cop.
Giving him his autograph. pic.twitter.com/6gNRBZB3q3

He also gave what might have been the greatest speech at a celebration parade ever.

Meanwhile… his coach was just out there making one-handed beer catches.

Man, just like I said after seeing Kevin Hart’s drunken antics, I think I am going to be rooting for the Eagles to win the Super Bowl every year from now on. Though I am not 100% sure the city’s infrastructure can handle another one.