Jason Williams On His Controversial Kobe Bryant Take: ‘I Said What I Said’ 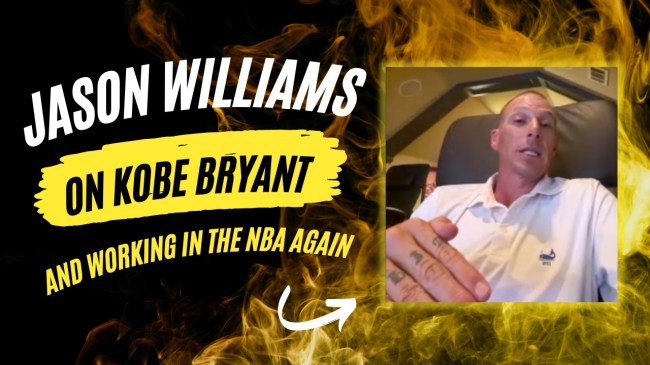 The former NBA superstar was dragged when he was asked to rank his Top 5 greatest Los Angeles Lakers of all time, omitting Kobe Bryant from the list. He told the podcast Players Choice that “Kobe is not really as high on my list as people really think he should be. I’m not even sure he’s on the top 5 of the all-time greatest Lakers.”

This controversial take angered many-a Lakers fan, especially those that recall watching Williams and Kobe square off in countless matches in the Western Conference back in the day.

On Instagram, Williams added some context to the conversation from the podcast. Williams walked the take back, claiming that he thought they were talking about the greatest NBA players to ever wear a Lakers jersey – not the greatest Lakers of all time.

Williams declared Kobe Bryant as the greatest Laker of the all time, period. Here’s how he backtracked it, which makes much more sense.

“What’s good world?! 💜 So I noticed I kind of stirred the pot so to speak last week with my comments about Kobe. 🙏🏼 I’ve seen some of your comments, but not nearly all of them… Some are positive, some not so positive!!! The anger that some folks have over this conversation is awesome to me cause it means you care!! 🏀 Now with that being said let me explain what I meant last week. First off: KOBE BEAN BRYANT is the greatest ✨LAKER✨ EVER!!! PERIOD!!! 💯,”

“In the conversation you all heard, my thinking was that we were talking about ALL the greatest NBA players EVER who wore the Laker purple and gold jersey for at least ONE season. I wasn’t talking about the greatest LAKER ever… because of course that’s Kobe!!! Kobe IS the Lakers!!! 💛💜 But in what I was saying, I was thinking about WILT, KAREEM, MAGIC, SHAQ, LEBRON… (That’s my top 5 players who ever played in a Laker jersey *in no particular order* in case y’all wondering!)… those players who—in my opinion—were/are better than KOBE!! That’s just my opinion! Doesn’t mean I’m saying it’s a fact!! 🤷🏼‍♂️ So my bad if I’ve hurt any of y’all feelings, it’s just my opinion!!!

“I love this game and I respect this game!! It has nothing to do with Kobe bustin my team’s ass just about every time we played them either. 👏🏼 Really the only difference between my opinion and y’all opinion is that I just happened to play against some of these dudes we talkin about and that’s it!! And I’ll do ya one better… The people I’ve named are way above my talent level!!!! Legends!! GOATs!!! 🐐🏆 #mamba,” Williams wrote.

I recently chatted with Williams about his recent work with POWERADE during March Madness. Williams is showcased in the “Pause is Power” – an initiative reminding student-athletes that sometimes we all need a breather to be our best selves. Williams is encouraging student-athletes to enter the “Press Pause Contest” for a chance to win $10,000 and allow them to rebalance and recharge themselves to come back stronger next season. Details here.

I asked Williams about getting trashed by Lakers fans. He completely owned it.

In my conversation (video below), he declared his admiration and respect for Kobe, while also painting his legacy, objectively, in overall basketball history.

“I said what I said, and I mean what I meant,” Williams explains to BroBible. “Kobe Bryant is the greatest Laker of all time, but that doesn’t mean that he’s the greatest basketball player that ever played for the Lakers. You know what I mean? It’s kind of like if I said D-Wade (Dwyane Wade) was better than LeBron [James]. LeBron is a better basketball player than Dwyane Wade, but when you think about the Miami Heat, who do you think of?

I’m sure Lakers fans are happy to see Williams clear all this up with a great sense of humor. The showdowns between White Chocolate and Black Mamba were legendary when both were playing in their prime.

Now he just needs that front office gig for an NBA team.

Watch the interview with Jason Williams via the BroBible YouTube channel: