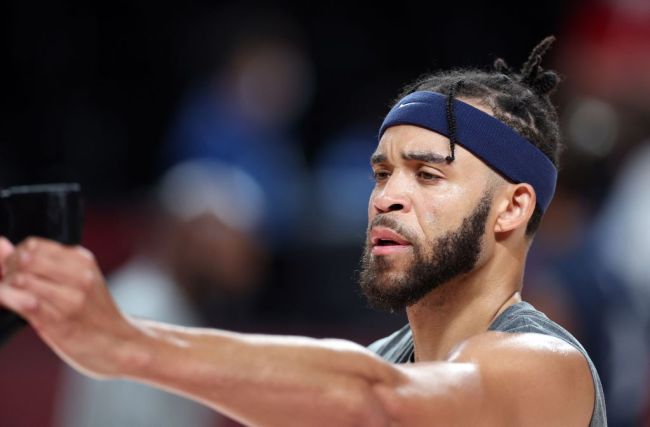 Pamela McGee is 58 years old and she is doing very well, her son JaVale wants you to know. JaVale, who is following in the footsteps of his mother by becoming an Olympic athlete, spoke with the media ahead of his Olympic debut in Tokyo on Friday.

During the press conference, McGee was asked one of the more bizarre questions in the history of media. It was so egregious that the Athletic’s Joe Vardon should probably be fired over the incident.

Vardon, an NBA and Olympic correspondent for the publication, asked McGee if his mom is alive…

JaVale McGee got asked a VERY weird question during his availability for Team USA 🤔 pic.twitter.com/vlpeLug4se

Vardon could have taken all of 15 seconds to search Pamela McGee and find the answer to his question. Yes, she is alive.

In fact, Pamela is absolutely killing it and JaVale let everybody know.

Moms is great! Getting it in! pic.twitter.com/5o32ITiE6p

Pamela McGee is a two-time NCAA Champion, the second-overall pick in the 1997 WNBA Draft and has a gold medal with Team USA. It was not a difficult research project for Vardon, who is being paid a significant salary to be horrible at his job.

There are plenty of other journalists who would have simply googled the answer to his question.

JaVale and Pamela McGee are making history as mother-son Olympians and have a chance to be the first mother-son gold medalists in basketball if the USA can bring it home. Team USA basketball begins its Olympic competition on Sunday at 8:00am EST.