Bears’ Javon Wims Offers Up Explanation For Why He Went Psycho On Saints’ C.J. Gardner-Johnson 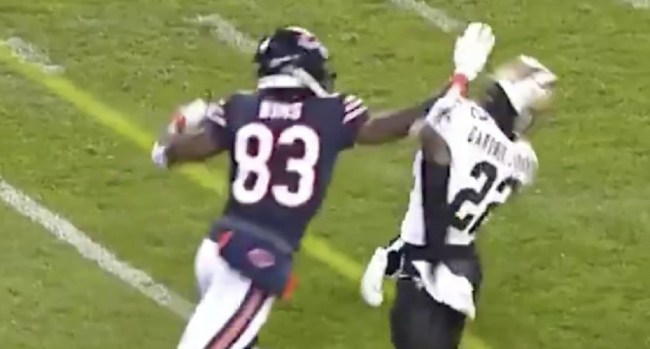 While the Saints defender didn’t really reveal too much about what happened between the two players, naturally, he did slam Wims after the game, even saying he thought the wideout punches “like a female.” With that kind of disrespect, should we all expect Round 2 at some point between these two? Maybe there’s hope down the line.

Gardner-Johnson may not have given too many hints about the incident, but Javon Wims apparently had a good reason for the back-to-back punches: Because his mouthpiece got ripped off his helmet by C.J. Gardner-Johnson. Take a look below at the video showing just that.

Ahhhh.. now i get it pic.twitter.com/hvHeI3yzYC

But that wasn’t the only thing that set off Wims after the two got in one another’s faces. According to the NFL Network’s Tom Pelissero, Wims told team officials that the Saints defender also spit on him — which doesn’t look apparent in the video above — and that it caused him to have such a passionate reaction.

Wims was ejected. The NFL is now considering a suspension, too.

Who knows what the punishment from the league might be for Javon Wims, but violently punching an opponent usually warrants a suspension and a hefty fine. Unless the NFL finds some definitive evidence of Gardner-Johnson spitting, the Bears wideout can probably expect to miss at least one game.

But then there’s this saucy little nugget to consider with all of this: C.J. Gardner-Johnson is also the Saints player Michael Thomas punched a few weeks ago, which caused some uproar about the All-Pro receiver. So could the New Orleans defender actually just be a massive trash-talker — even to guys in his own locker room — who crosses some sort of line which leads to punches? I mean… his record sort of speaks for itself at this point, so maybe he’s just a giant, antagonizing troll.

It’ll be interesting to see how all of this plays out and what happens once the league reviews the Javon Wims-C.J. Gardner-Johnson punching incident. And now that the defender has been involved in two fights that led to him getting punched, it might be time for the Saints to talk with the guy to see what the hell he’s doing to piss off so many people.