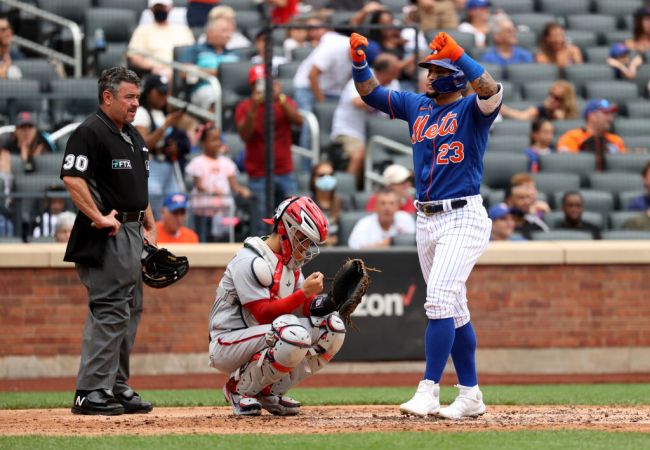 The way Javy Baez was running his mouth on Sunday night, you’d think he was a widely respected Met who’s been with the organization for years — through both the good and the bad, the ups and the downs, the highs and the lows. You’d think he’s been suiting up in Queens and going to battle for the city for the majority of his career. You’d think he’s been a productive ballplayer for the club.

Alas, none of those things are true: while the Mets foolishly traded for Baez in late July, he has just 13 hits so far, touting a .210 batting average in the process. He’s been with the organization for mere months, and in that time, he hasn’t done all that much to justify his acquisition. In fact, you can argue that following his antics on Sunday, he’s quite literally done more harm than good.

And yet, despite this, when Baez stepped to the mic for his postgame press conference following Sunday’s win (just their 8th win of the month) over the Washington Nationals (who are virtually a Triple-A team right now), he took it upon himself to call out Mets fans for booing the wildly underperforming team, who turned a four-game NL East lead on July 31 into a 7.5 game deficit by August 31. The Mets traded for Baez on July 30, by the way. Funny how that works.

“We’re not machines,” Baez said to reporters following the Mets 9-4 win over the Nats. “We’re going to struggle seven times out of 10. It just feels bad when … I strike out and get booed. It doesn’t really get to me but I want to let them know that when we’re successful, we’re going to do the same thing to let them know how it feels.”

“If we win together, then we got to lose together, and the fans are a really big part of it,” Baez said. “In my case, they got to be better. I play for the fans and I love the fans, but if they’re going to do that, they’re just putting more pressure on the team and that’s not what we want.”

Just like that, in one undercooked, overconfident, generally pathetic postgame press conference, Baez — who is a free agent after this season — not only sealed his ticket out of New York City but damningly proved that the Participation Trophy Generation is real. Mets fans, especially those trekking out to Citi Field, are paying customers, and it’s because of those consumers that Baez is able to take home over $11 million this season. When you’re paying for overpriced seats to drink overpriced beer and watch an underperforming team show little to no fight for the course of an entire month, you’re allowed to express your frustration. This is New York City, after all — even the likes of Derek Jeter and David Wright were once booed… when they were poor. When they performed up to their ability and their paychecks, this city helped turned them into legends. If Baez doesn’t want to be booed, he should give Mets fans something to cheer about. Otherwise, he can keep his mouth shut until the end of this lost season when he can take his lack of both self-awareness and strike zone awareness to another town.

Not the best swing here from Javy Báez…pic.twitter.com/xSJirOCtDN

New York City ain’t for everyone, Javy. The only thing you’ve done since arriving here is prove you’re not one of them. Hopefully, the Citi Field crowd gives Baez a sarcastic standing ovation whenever he strikes out from now on (which is a lot). Let’s see how he enjoys that.

It’s impossible to think of another prospective free agent making a bigger public relations mistake then Javier Baez did today. Burned one bridge, and likely severely damaged his chances w other teams. Francisco Lindor needs to prepare an explanation for his participation, too.