NFL Stars Such As A.J. Brown, Darius Slay Voice Support Of Jay Cutler Trying To Get The Bag In Divorce From Kristin Cavallari 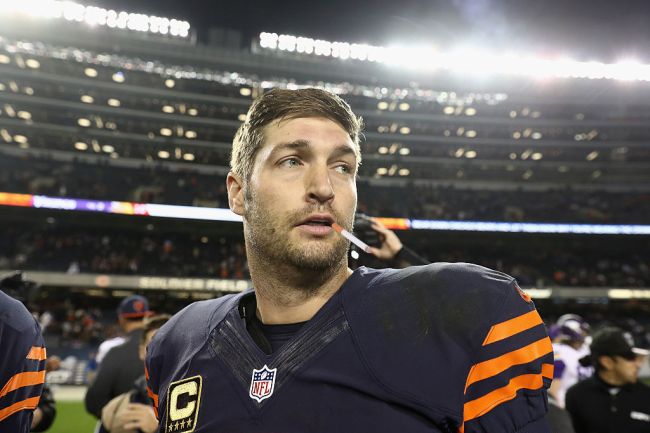 During his playing days, arguably the biggest criticism of former Chicago Bears quarterback Jay Cutler was his seemingly indifferent personality. That he didn’t play with enough fire in his belly, wasn’t enough of a leader at a position that requires it. The defining moment of his career is likely the 2011 NFC Championship game, which resulted in many fans, journalists, and former players alike wondering whether or not he quit on his team.

Conversely, though, Cutler’s apparent nonchalance became appealing to the everyman, as if he was just a dude who happened to become an NFL quarterback. Blake Bortles before Blake Bortles, but also much better. It’s why “Smokin’ Jay Cutler” became a thing.

Since retiring, that side of Cutler has seemed to flourish thanks to his starring role in his soon-to-be-ex-wife’s reality show Very Cavallari. SB Nation said he was a “scene-stealer”. The Washington Post literally published an article titled “Jay Cutler is the very best part of Very Cavallari'”

Very Cavallari without Jay Cutler would’ve basically been The Office without Michael Scott. No point. https://t.co/z7SHyLFyuQ

The reason I mention all of this is to contextualize exactly who Jay Cutler has become to a generation of football fans: he just a GUY. He represents all of us in our most guy form. “Just guys bein’ dudes,” as the fabled phrase goes. Throwing footballs and ripping heaters. 5 o’clock shadow and a 2-pack of abs. Marrying stunning reality stars and asking for half of her “brand” in the divorce negotiations. And that’s his right. Signing prenups are a two-way street — there’s no gender discrimination when it comes to the law, divorce-related or otherwise.

Tennessee Titans wide receiver A.J. Brown was clearly supportive of Cutler’s decision, tweeting, and then deleting, “Jay Cutler for president! Do this for all the men in the world!”: 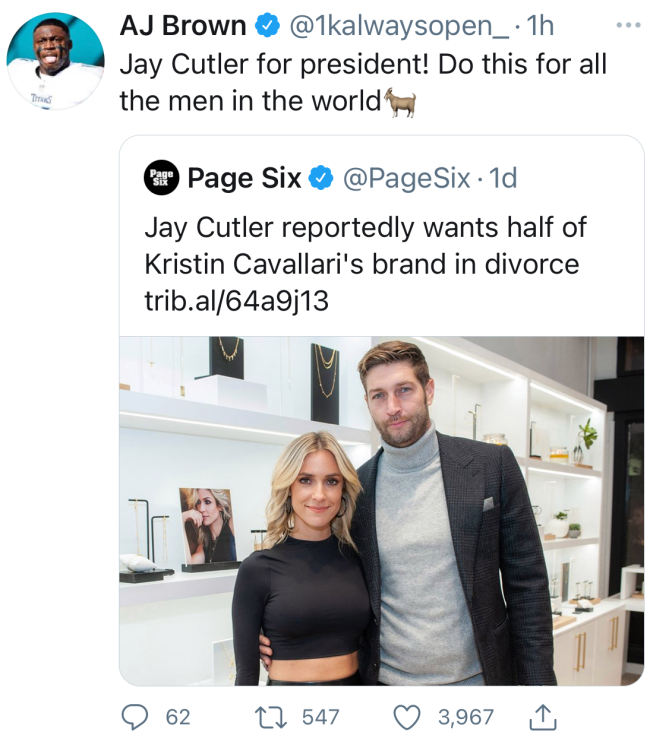 Brown ultimately deleted the tweet, though, and followed up by saying “People just got so butt hurt over that. Relax.”

Brown wasn’t the only NFL pro to give Cutler a shoutout on Twitter, as both Philadelphia Eagles cornerback Darius Slay and Green Bay Packers cornerback Adrian Amos also chimed in:

😂 when the tables turn https://t.co/IhQG1JG5vP

Boys out here supporting Jay Cutler as he attempts to set a new trend for Kings I see!! Y’all dudes are really funny. Y’all know who y’all are too. That being said. Get yours Jay. 😂😂😂

Don’t see a prob .Shoe was on the other foot, she would expect the same https://t.co/xUyc19UvUk

Get that half you deserve it bro! https://t.co/cCxKNGJmQt

Jay Cutler, man — perhaps not an NFL legend, but a dude legend. And there are, after all, more dudes than NFL fans, making Cutler a legend in a game actually larger than football.