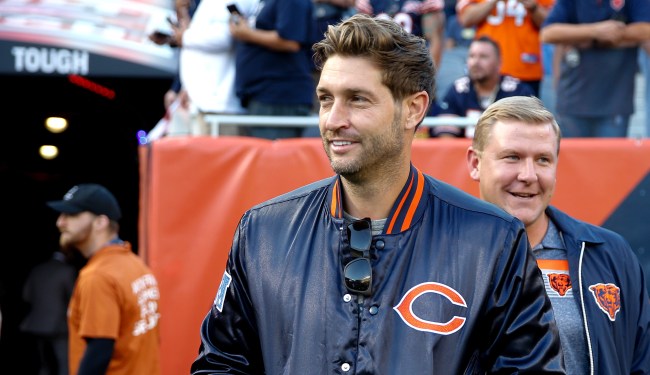 Reality TV star Jay Cutler apparently has no need to his estranged wife Kristin Cavallari’s show on E!. His whole life is a reality show, at least based on this week’s “episodes” of him trying to figure out who or what has been killing his chickens.

In case you somehow missed it, former NFL quarterback Jay Cutler and his majestic hair have been on the hunt for a serial chicken killer this week. Thankfully, the man his soon-to-be ex-wife reportedly called “lazy” and “unmotivated” has been anything but as he’s set up cameras and has been chronicling the whole thing on Instagram.

It’s truly a level of commitment that NFL fans have rarely, if ever, seen from the former Bears and Dolphins QB.

At first, Smokin’ Jay thought the killer might be the housecat Thelma, but it was cleared and Jay was forced to apologize. (Not kidding.)

Then he thought it might be an owl, but the sounds he was hearing were, in fact, doves. So no owl.

So the hunt goes on.

Only now it involves night vision goggles and a all-night stakeout in his kids’ tree house. (Again, not kidding.)

“Obviously things have escalated,” Jay reported. “We’re gonna sit here and make sure Old Blue (his chicken) has a good night tonight and whatever happens, happens.”

Unfortunately for Old Blue, who Jay refers to as the “coolest rooster in the game by far” (still not kidding), Friday morning came and went and, “No culprit last night, which is okay. Stayed up way too late. Super tired this morning. But, Old Blue’s gonna be on the case today.”

There is little doubt, however, that Cutler will get his man, errr, predator, because as Jay said alongside this photo of Old Blue, “Sometimes you have to fight crazy with crazy. Ole Blue has that look in his eyes. New sheriff in town. Predators beware.”

That fact the Jay Cutler now has the freedom to do whatever he wants, like stakeout in a treehouse with night vision goggles and a gun to kill whatever is murdering his chickens, brings me so much joy. That is the American dream. pic.twitter.com/gdcoAZMpGw

I’d pay unlimited dollars to sit in a tree house with Jay Cutler while wearing night vision goggles searching out a chicken killer.

Jay Cutler smoking a cigar with night vision goggles on is a mood.

Jay Cutler hanging out on his deck with night vision goggles to watch his chickens is my kind of party.