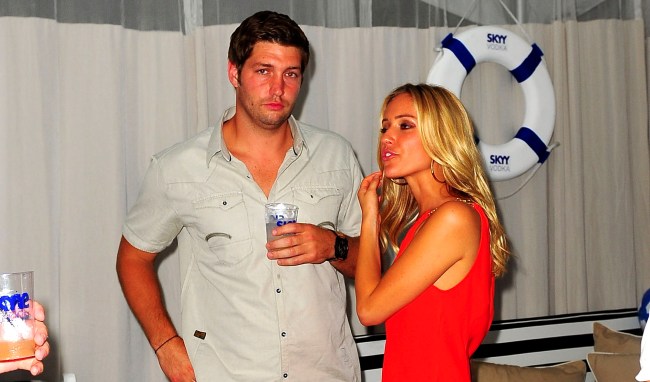 Okay, here we go. Now the Jay Cutler vs. Kristin Cavallari divorce war has offically reached the “sources say” point that we knew was coming when you consider the fact that Cavallari’s main occupation as an adult has been, well, manufacturing publicity for herself.

Cutty, who filed for divorce first, by the way, has, of course, been his usual silent self. Cavallari, on the other hand, has had “sources” and “friends” come out of the woodwork to sing her praises and denigrate the former NFL quarterback at pretty much every turn over the past week.

This despite Cavallari claiming on social media, “We have come to a loving conclusion to get a divorce.”

Since then, divorce papers have revealed that she has been trying to buy a $5.5 million house, but Cutler is refusing to release the funds, calling it “a completely frivolous and unnecessary expense” because they already own several other properties where she could live.

Now, two more stories have been published which attempt to paint Cutty in a bad light, especially when it comes to his behavior while Kristin was filming her reality TV show Very Cavallari in his and his kids’ house.

“He would make her cry all the time during production. He talked down to her and belittled her,” a Cavallari friend tells PEOPLE. “She couldn’t take it anymore.”

Another source close to Cavallari, 33, says the exes have been “struggling” for “at least three years,” and that the Uncommon James founder has long been unhappy.

“He belittles Kristin and makes her cry in front of other people,” the source says. “He flies off the handle at the littlest thing and would make Kristin absolutely miserable.”

“There have been instances while filming where he would be mean to her, embarrass her, make her feel bad or storm off. He was never pleasant to the crew or others filming,” a source tells Us Weekly exclusively. “Her breaking point was this last year. She felt like it was time. They had been trying to make it work and she certainly had been. They had been to counseling.”

Cutler’s behavior was repetitive too. “Jay has a temper. He’s a shouter,” the insider says. “He didn’t have an issue about calling her out or yelling at her in front of other people. That experience was really embarrassing her. He would be rude to fans and that was really embarrassing to her. That’s not her at all; she’s always nice to her fans. It’s been like that for a long time, but she was sticking it out for the kids.”

All I know is that divorce sucks, and it’s made even worse when it results in my no longer getting to see Jay Cutler do his thing on camera. Someone out there better sign him to a broadcasting gig before the next NFL season gets started.