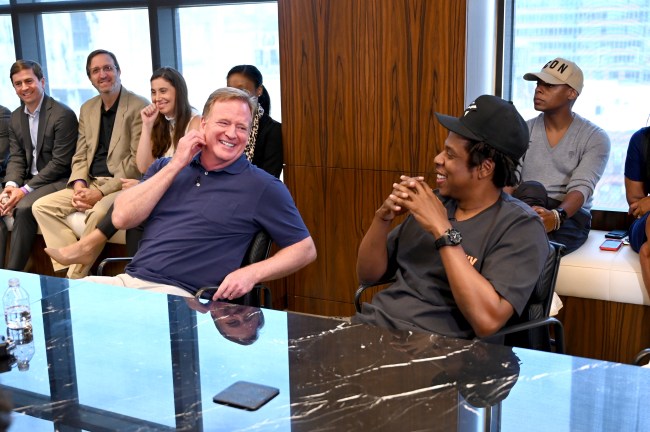 Jay-Z didn’t earn much respect in the streets for entering into a multiyear partnership with the NFL to bolster the NFL’s live game experiences and to pump up the league’s social justice efforts.

Dame Dash tried to convince us that, ‘Everybody knows Jay-Z ain’t shit.’ Kenny Stills called out what he perceived to be Jay’s hypocrisy. Kaepernick ripped him for trying to profit from social justice initiatives.

On Jay Electronica’s “Flux Capacitor” off his newly released debut album, A Written Testimony, the billionaire rapper addressed the notion he sold out for the money.

Why would I sell out? I’m already rich, don’t make no sense
Got more money than Goodell, a whole NFL bench
Did it one-handed like Odell, handcuffed to a jail
I would’ve stayed on the sideline if they could’ve tackled that sh*t themselves

This ain’t the first time Hov addressed his critics. In a New York Times interview that was published a day before Super Bowl LIV, he said:

“We didn’t say, ‘Let’s go make some money off the NFL,'” he said. The rapper added he could deal with criticism over the partnership if it helps white football fans realize they should care about police brutality, too. “As long as real people are being hurt and marginalized and losing family members, then yes, I can take a couple rounds of negative press.” [via Complex]

No one will ever convince me that a crack dealer who made himself a billionaire is worthy of anything less than my undying respect.