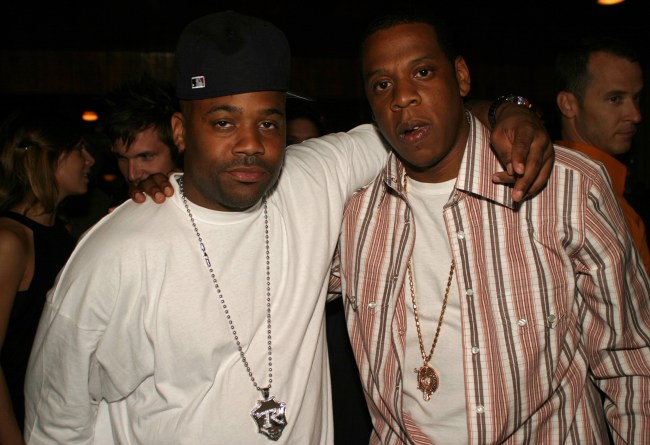 Jay-Z’s Roc Nation deal with the NFL has been extremely controversial and now one of the Jay’z old business partners is blasting him for conducting business with the league.

Last week, the NFL announced that it had reached an entertainment and social partnership deal with Jay’z Roc Nation imprint.

NFL is forming an "entertainment and social justice partnership" with Jay-Z and Roc Nation, per @MarkMaske

Jay-Z doesn’t need the NFL’s help 2 address social injustices. It was a money move 4 him & his music business. The NFL gets 2 hide behind his black face 2 try to cover up blackballing Colin. #NeoColonialism https://t.co/tO49a1JC2c

Dolphins WR Kenny Stills criticized Jay-Z for his comments about kneeling after the hip-hop mogul formed a social justice partnership with the league. https://t.co/RO9Ge1OjvB pic.twitter.com/PyCzMZPBgk

Jay’s former business partner, Dame Dash, who co-founded Roc-A-Fella records and Rocawear, went on Adam 22’s ‘No Jumper’ podcast to blast Jay-Z for signing a deal with the NFL.

“I mean, everybody knows Jay ain’t sh*t,””Everyone knows that…Listen, if you ask anyone in the industry, it’s a common knowledge that Jay ain’t shIt.” When asked to define what “ain’t sh*t” means, Dame replied, “He’s about the bag. We all know that. He’s self-preserving. Period. It’s just that the people he does it to don’t have Beyoncé next to ’em. They don’t have that kind of power, but this dude here, everyone’s looking.”

Dame even went on to compare Jay to President Trump.

“There’s always been a pattern with that dude, so it is what it is. Y’all know what it is,” Dame said. “It’s just everyone always forgives him. You know, he’s like Trump in that way. He can do anything, say anything and look at it—everyone goes with I guess, they just go with the popular sometimes. But again, it always reveals itself in some way.”

It is worth noting that Dame has been at odds with Jay-Z after they fell out following the sale of Roc-A-Fella records.