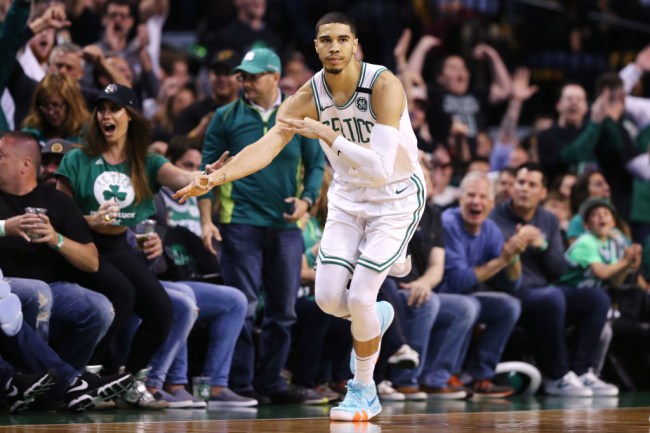 Before Jayson Tatum was selected third overall by the Celtics in the 2017 NBA Draft, he despised Boston. Which is a bit odd considering he’s from St. Louis, and the Boston/STL rivalry isn’t exactly red hot. The sole reason Tatum hated Boston was because he was a Kobe guy, and being a Kobe guy and a Boston guy is like being a fan of both Bayside and Valley, for all my Saved By The Bell fans out there. I would know, I’m from Boston and I’ve hated Kobe and the infuriating way he contorts his lips for two decades.

In a recent appearance on The Bill Simmons Podcast, the 20-and-1/2-year-old Tatum opened up about his admiration of Kobe and how fortunate he was to work with him this offseason.

Simmons: Your guy was LeBron, right? As a kid?

Tatum: No, my favorite player was Kobe.

Simmons: Oh, so when he did the Detail [episode] on you, that was a big deal.

Tatum: Yeah, I watched it like 70 times. That was my favorite player ever. But LeBron was one of them, Carmelo, Paul George, KD. Guys that just play the wing position.

Simmons: Who did you borrow from when you were learning how to become a basketball player? Or were you just, like, your own style?

Tatum: I took a little bit from everybody. Especially like, I studied a lot of Paul George and Melo when I was in high school. Those were two guys that I always would watch film on. And Kobe, just from the day I started playing. Like, he was the reason I wanted to play basketball [as] a kid. My earliest basketball memory was of him.

Tatum: Even before then, like when I was like 4 or 5, I’d just always tell—my mom would ask me what I wanted to be when I got older. And I would just be like, “I wanna be Kobe.” She’d be like, “You wanna be in the NBA?” “No, like, I wanna be Kobe.” He was just my favorite player. I had his posters, all his jerseys. That was my guy.

Simmons: Well, I don’t like that he’s become your friend and you’re working out with him in the summer. He’s a Laker; we don’t like the Lakers.

Tatum: I used to hate Boston.

Simmons: Yeah, well, we need to fix that.

Tatum: No, I love Boston now.

Tatum: I got a chance to just sit down and talk to [Kobe] first. You know, I got to meet with him. And we talked about a lot of things, basketball-related, non-basketball-related. I tried to get into his mind and see how he went about things. Just trying to get better each year, what he wanted to improve year after year so he didn’t backtrack or be complacent. His will to just be the best and just striving to get better every year. That’s one thing I found interesting. When we were working out, his thing was just trying to break the game down and make it as simple as possible. He said the year he averaged 35, all he worked on in the summertime was pivot foot, trying to play off both pivots. He said, “That’s all I did for the entire summer. Obviously, I expanded off a move from each pivot and a counter move to that.” But he was like, “The entire summer that’s all I worked on.”

Tatum, who half his Kobe’s age, has been working out his idol this offseason. He called the experience “a dream come true.”

Jayson Tatum: Working out with Kobe 'was a dream come true.' https://t.co/Jfje7knC9F pic.twitter.com/4cFRSmSRMB

And they say ‘never meet your heroes.’ Scoff.