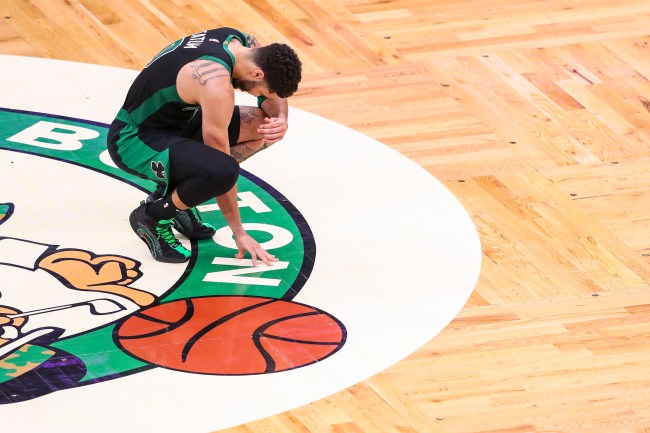 I don’t know what narrowly missing a $32 million payday translates to for a 23-year-old making $163 million contract over five years, but if the average American dropped a comparable lottery ticket down a sewer, they’d need a lobotomy.

Celtics All-Star Jayson Tatum came up just short of receiving his second-straight All-NBA nod, a final kick in the nads after a dismally underwhelming Celtics season that sent the team’s 17-year President heading for the hills following a first-round playoff exit before his team finished showering.

Add that to a bout of COVID at the start of the year that forced him to use a pre-game inhaler for the rest of the season, the Duke product has every reason to sob into his millions after coming within 20 votes of reaching All-NBA.

Tatum finished with the most points (69!) among players who did not receive honors, with Jimmy Butler (131 points) and Paul George (89 points) filling the last two forward slots.

If there’s any consolation for Tatum, he did finish ahead of third team All-NBA guard and Lucky The Mascot murderer Kyrie Irving (61 points) in the voting, but he was listed as a forward because he received the most votes through that position. And Donovan Mitchell is crying in the same boat.

The Jayson Tatum and Donovan Mitchell rookie max extension will stay at 25% of the cap in 2021-22.

Both were eligible to receive an additional $33M if named All-NBA.

If Tatum made the All-NBA selection he would have increased the total of his rookie extension with the Celtics by $32 million, increasing the value of the five-year deal from $163 million to $195.6 million. This is due to the NBA Rose Rule which allows teams to pay a player 30 percent of the salary cap instead of 25 percent in a rookie extension when the player meets one of the following criteria.

Boston Celtics star Jayson Tatum not making the All-NBA team disqualifies him from earning an escalator $32 million bonus that was in his contract.

Tatum never threw his coach or his teammates under the bus during a season that warranted it, so I feel for the dude. But I won’t lose sleep over it because at 23, I was sleeping with cockroaches and eating hard taco shells for dinner.