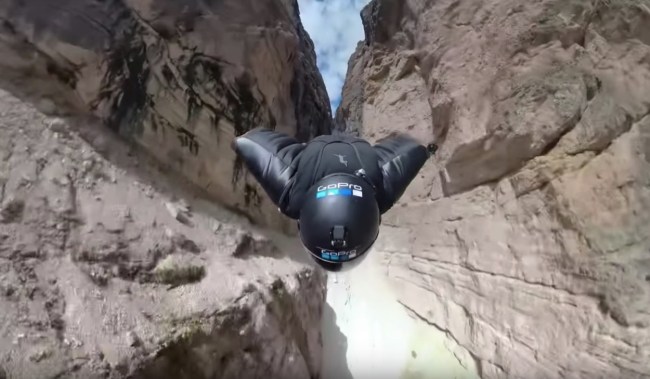 Flying down a mountain wearing a wingsuit is easily the most extreme sport I can imagine. The only thing I can think of that could possibly top this is the Running of the Bulls in Pamplona, Spain where you’re forced to sprint down a winding road as you’re being charged by angry bulls.

At least in that situation, you’re able to jump out of the way as the bull gets close. With the wingsuit, if you get close enough to a mountain there’s really no sudden movement that you can make to recover. You’re hauling ass and the wind force won’t allow you to make those sudden movements.

The Dolomites in Italy are absolutely stunning mountains but they’re also a global destination for wingsuit junkies because they offer the most extreme lines for people to fly.

In this clip, Jeb Corliss comes within inches of smacking his body against the rock mountains as he flies through unbelievably narrow passages first scouted by the late Uli Emanuele who died in a crash at Lauterbrunnen in Switzerland while filming a wingsuit video (NOT the one below, obviously).

What’s REALLY cool about this clip is you can see the full footage on YouTube, which I’ve got here, but there’s also a Virtual Reality 360-degree video you can watch on Vimeo (also below) which allows you to move around the camera angles. The first two clips from YouTube are the regular footage, the third one is the Vimeo VR-360 footage. Definitely watch the first two, they’re only a minute or two each.

I’ve always been fascinated by wingsuit flying but after seeing how many recorded deaths there are on the Wikipedia page that tracks them I’m not sure I could ever try wingsuit flying myself. If there have been THAT MANY deaths from seasoned veterans with countless flights under their belt then why would any rookie ever want to give this a try???