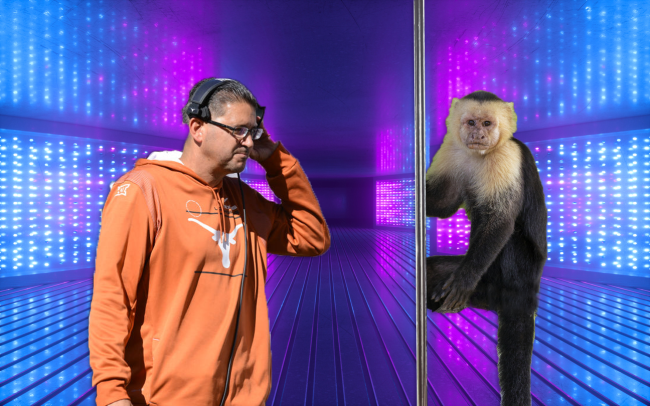 When it comes to poles, University of Texas special teams coach Jeff Banks’ girlfriend assassinates them. The 46-year-old Longhorns assistant has been dating a woman who works as a stripper since Feb. 23, 2017 and she recently sparked controversy with her monkey.

Gia, who is a white face capuchin monkey, allegedly bit a trick or treater on Sunday night. Her owner, Banks’ girlfriend, is not denying that any such incident happened, but she did say that nobody was viciously attacked, the child did not have permission, and that nobody contacted her about the bite.

This is Gia sipping on a juice box:

It is hard to imagine that Gia attacked an innocent child without merit and she is innocent until proven guilty. Banks’ girlfriend has her story and we will have to see whether we ever find out if it is the truth or not.

Regardless of what happened, it does not change the fact that the duo is truly talented. Banks’ girlfriend — who calls herself “the Pole Assassin” — is such a legend in her field that she has even performed on the Jerry Springer show.

However, the Pole Assassin is not always a solo act. She and Gia often perform together on stage at the club.

CLICK HERE TO SEE GIA THE MONKEY WORK THE POLE.

The Pole Assassin also performs alone and it’s not hard to see how she got her nickname. She assassinates poles.

When it comes to her skills, the Pole Assassin is an absolutely incredible athlete. The things she can do on a pole are truly impressive.

That one absolutely blows my mind. How do those women not tear something?!?! How much practice does that take?!?!?!

Despite all of the wild stunts that the Pole Assassin can do, it is her monkey that is the true star of the show.

CLICK HERE FOR ANOTHER VIDEO OF GIA DOING HER THING ON STAGE, AS A TREAT.

Banks, who has coached at UTEP, Texas A&M, Alabama and now Texas, is considered one of the top football minds in the game. He worked closely with Nick Saban while in Tuscaloosa and Steve Sarkisian hiring him away from the Tide was a big deal.

There is certainly no denying that Banks has an incredible eye for talent.