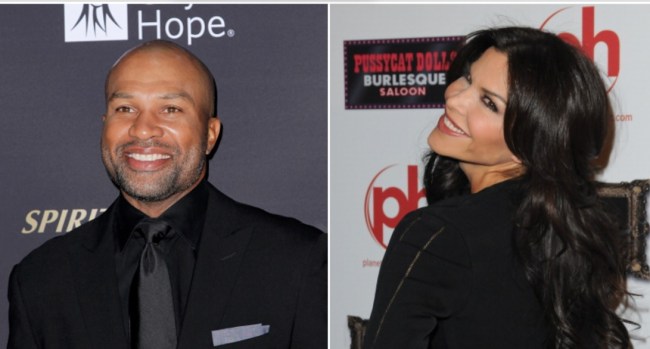 Last week, Amazon billionaire Jeff Bezos took to Twitter to announce that he was getting divorced to his longtime wife Mackenzie.

It was later reported that Bezos was having an affair with TV host Lauren Sanchez, the wife of his neighbor and good friend Patrick Whitesell.

Bezos, 54, and Sanchez, 49 — who is also a helicopter pilot — got to know each other through her husband, an agent to stars including Matt Damon, Christian Bale, Kevin Costner and Hugh Jackman

Sanchez apparently has a bit of a history of trading up according to her former fiance, Anthony Miller, who once played wide receiver for the Denver Broncos.

A source told us: “Lauren was with Derek Fisher for a while [after] things went south with Anthony Miller. Then she traded up to ‘NYPD Blue’ star Henry Simmons, and they were engaged. Then she was getting married to Patrick Whitesell.”

Miller claims he met Sanchez at the Super Bowl in 1996 while she was covering the game.

He said of their four-year relationship: “I couldn’t really trust her. She gets around. She was cheating on me with other guys.” Sources close to Sanchez strongly denied his allegations, and claimed it was Miller who strayed.

Miller also claims that Sanchez never returned the engagement ring her gave her.

Anthony, who now runs a legal marijuana growing operation in California, claims he was pressured by Sanchez into giving her an engagement ring – and then she never returned it when they split up in 1999.

“I kind of gave her that because she bugged me about getting married,” he said.

“I kind of gave it to her to shut her up. I gave her the engagement ring to kind of chill out.”

When he finally called off their engagement he says he never saw the engagement ring again.

As for Bezos he’s still going strong with Sanchez despite all the gossip about their relationship in the tabloids..

Billionaire Jeff Bezos’ and Lauren Sanchez‘s respective spouses knew about their romance months before the world did.

A source close to the couple tells PEOPLE Bezos’ wife of 25 years, MacKenzie Bezos, and Sanchez’s husband, Hollywood agent Patrick Whitesell, were aware of their relationship for a while.

“Their families dealt with this in the fall,” says the source.

“The world is catching up to it, but it has had zero impact on their relationship,” says the source close to them. “They’ve never been stronger.”

Despite the headlines about their romance, Sanchez and Bezos — whose estimated $137 billion net worth makes him the world’s richest man — have shown no signs of slowing down.