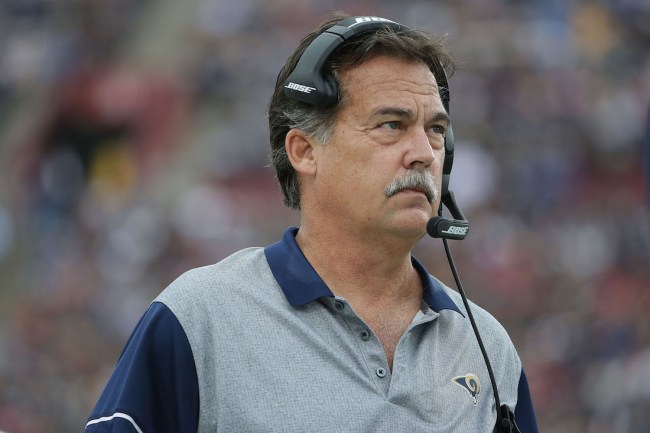 Longtime NFL head coach Jeff Fisher was fine as a coach  — leading one of his teams to the Super Bowl and reaching the postseason a bunch of times — but, when all was said and done on his NFL coaching career, the guy finished with an overall record of 173-165-1. Add that up over his 22 seasons, and it pretty much comes out to an average season of just 8-8.

While Fisher may have finished his NFL coaching career with an above average win percentage, most fans remember him for going 7-9 — which he did four times during those 22 years as an NFL head coach. And with the league moving to a 17-game regular season starting next NFL season, there will no longer be another team that finishes with a 7-9 record. Yes, it’s now retired forever.

Considering Jeff Fisher was the king of the 7-9 record, NFL fans had to show their appreciation for the former head coach by taking to Twitter to show their love. Since social media always wins, the good people of the Internet properly retired the jokes in proper fashion, so take a look below at some of the replies.

When Jeff Fisher sees this tweet and returns to the NFL because he sees 7-9-1 as a challenge he can conquer https://t.co/zAhBgT1SCt pic.twitter.com/Yc43RwWNYw

Jeff Fisher coming back to the NFL knowing he can never go 7-9 again pic.twitter.com/4UG5O9QKqp

It is now impossible to go 7-9 in the NFL. https://t.co/mDdzuHDFmN

Man, you’ve got to feel for Jeff Fisher, who accomplished a lot as a head coach in the NFL — which includes having the most losses in league history as a head coach (165), which is tied with Dan Reeves. That speaks more to the longevity of Fisher in the NFL than anything else, but, of course, many fans usually focus on the negative side of it.

Another head coach who can no longer show his mediocrity now that the NFL schedule moves to a 17-game regular season is Jason Garrett, who must feel a little bit relieved that he can no longer go 8-8 — which he did four times in 10 seasons while manning the sidelines for the Cowboys. That’s actually more impressive than Fisher going 7-9 all those times during his tenure, in my personal opinion.

I guess this 17 game NFL schedule means Jason Garret will never get another head coaching job.

Anyways, the NFL season will never be the same now that there’s a 17th game. That’s good for fans, it’s good for the overall business of the league, and it’s good for coaches like Jeff Fisher and Jason Garrett, who can finally rid themselves of the horror of 7-9 and 8-8 forever.