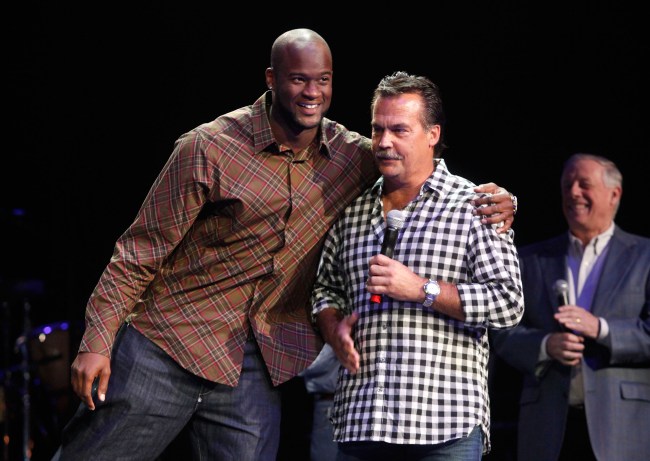 Last June, Vince Young’s playing days came to an official end after he was cut by the CFL’s Saskatchewan Roughriders following a torn hamstring. The third overall pick in the 2006 NFL Draft played six seasons in the NFL, and after being named the NFL Offensive Rookie of the Year, never achieved the success many had hoped from him.

Young spent five of his six NFL seasons for the Tennessee Titans under head coach Jeff Fisher. They fucking hate each other.

In a bombshell Sports Illustrated piece following his release from the Saskatchewan Roughriders last year, Young shredded his former coach–“I’m going to expose his ass,” he said of Fisher. He then went on to say that Fisher would often cancel or flat-out not show up to meetings in favor of fishing with Kerry Collins. Even Young’s pastor describe Fisher as “jealous” and “envious” of the quarterback.

Despite doling out a hefty serving of blame, Young said that he once wrote a letter to his former coach apologizing for his immaturity during his playing days. Fisher never responded–“I guess he doesn’t give two shits about me,” Young said.

Well, flash forward nearly one whole year and Fisher has finally opened up about receiving the letter. Fisher appeared on 104.5 The Zone’s SportsFest at First Tennessee Park and had this to say:

“I still have it. But I didn’t know if it was from him so I felt no need to respond.”

Fisher – not Fischer – said he gets a lot of mail.

“I thought if it was from him he would have maybe spelled my name right,” he said.

I’ve seen a few media outlets calling Fisher petty and stubborn for his reasoning. But is there anything more unintentionally disrespectful than someone not taking the time to learn/spell your name correctly? These two spent five goddamn years together. But, on the other hand, Fisher and the Titans drafted Young after he scored a 16 out of 50 on the Wonderlic test. A few spelling errors are to be expected.