Jeff Saturday Gets Lit Up Over Clock Management Fiasco 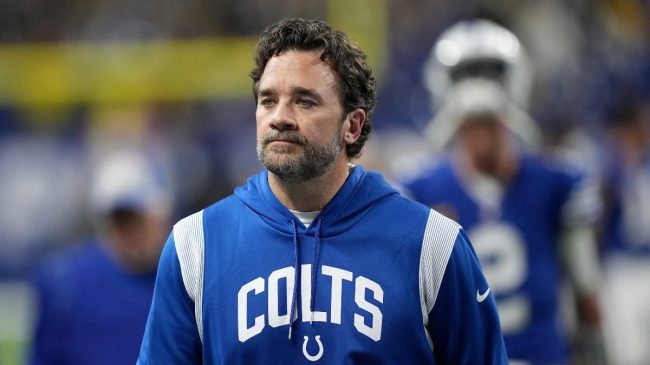 The Indianapolis Colts ended up losing to the Pittsburgh Steelers in what turned out to be a rather exciting game between two losing teams. Even so, the loss may have been a tough look for Indianapolis after head coach Jeff Saturday made some questionable clock management decisions. Now, he’s getting roasted for it online.

There was a moment in the game on Monday night when the Colts were driving down the field to potentially tie or win the contest. Matt Ryan scrambled for a 14-yard gain but fell short of the first down. With the clock running down, Jeff Saturday never called a timeout, resulting in losing 25 valuable seconds. In the next play, Indianapolis failed to convert on fourth and short, giving the Steelers the win.

According to Ian Rapoport, the Colts’ head coach defends his decision-making. He claims, “I thought we had plenty of time, I wasn’t really concerned. We still had timeouts. I wasn’t too concerned. When [Ryan] was going down, I couldn’t tell where they were gonna start him from going down, right? If he was gonna get the first down. And then we got there, I expected us to get on the ball and have another play, a little bit quicker than that. But again, this wasn’t a press for time. We just didn’t make enough plays.”

Not calling a timeout may have been the difference maker. Jeff Saturday failed to realize that maybe a 37-year-old quarterback might need a quick breather after running 14 yards. For that reason, Colts fans are lighting him up.

Maybe.. just maybe there’s more needed to qualify as a head coach than “Peyton and Aaron used to touch my balls”

Yeah, Jeff Saturday’s old tweet is coming back to haunt him.

This is a valid point. Matt Ryan is a veteran and could have easily called a timeout as well.

Why didn’t Matty Ice pop up after his first down scramble and signal time out to the refs?

Luckily for Jeff Saturday, he’s brand new to coaching. We’ll see if he can learn from his mistake, as that will be crucial for his development as the Colts’ head coach.