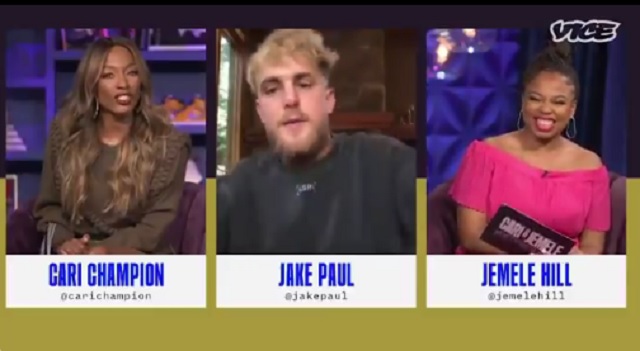 Jemele Hill and Cari Champion have found themselves in the middle of a controversy regarding their interview with Jake Paul and they’ve come out to defend themselves.

Last week, Paul was a guest on Hill and Champion’s late-night Vice TV show ‘Stick To Sports’ and they asked him if it was “racist’ for him to knock out Jake Paul.

Question of the week: was @jakepaul KO to Nate Robinson racist? 😭 pic.twitter.com/ogSqHj764s

Both former ESPNers were immediately blasted by the Internet for asking the question which many felt was inappropriate.

On Wednesday both Hill and Champion took to Twitter to defend their question to Paul. The two hosts explained that they were surprised by the backlash because they were clearly just joking.

It’s a late night talk show that comes on at 11:30p. It ain’t supposed to be PBS. I also didn’t realize I wasn’t permitted to joke about race just because I also have the range to talk about it seriously. https://t.co/UPr7oZpE45

We were. I’m now laughing that people actually thought we were serious. https://t.co/mZlsmRrzps

Y’all, @jemelehill and I were trolling a troll with permission. This wasn’t an interview with weight. It was sarcastic- y’all need context? Bc if y’all can’t hear the laughing, the bad WiFi connection- smh. So for the outraged! For more context Thurs. at 1130pm on @VICETV 👀. pic.twitter.com/qwIAk2nuUT

People didn’t seem to think the “joke” was funny and continued to pile on.

this is just shitty interviewing/wave riding

ya'll deserve ALL the slander https://t.co/SD7BRZYwZT

— Being Smarter Than You Isn't MY Problem It's YOURS (@THEEHollywood_) December 9, 2020

And it’s clear that Jake Paul didn’t think it was funny the second time it was asked. https://t.co/uybbCiKKcJ

Y’all be puttin salacious clips out for public reaction and be shocked when you get what you asked for.

Y’all picked this particular clip for a reason. Stand in y’all lame ass jokes with pride.