‘Jeopardy!’ Champ James Holzhauer Breaks Down What His Daily Life As A Pro Sports Gambler Actually Looks Like 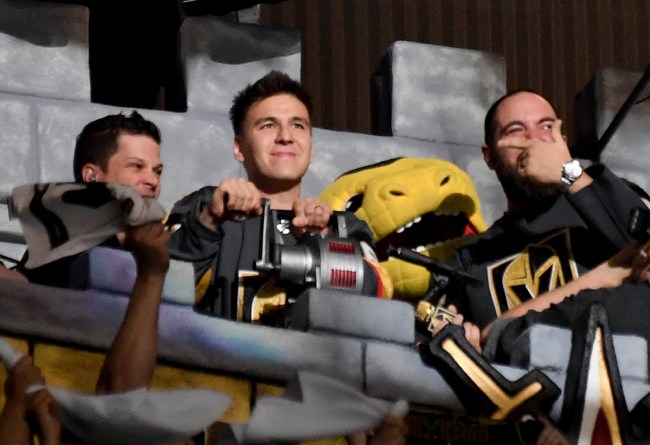 James Holzhauer has effectively made Jeopardy! his bitch over the past several weeks. He’s racked up $1.69 MILLION in earnings and he’s only suffered one close call along the way. As far as I’m concerned, there’s no end in sight for his reign as champion on Jeopardy! and there’s a solid chance he’ll eventually break Jen Jennings’ record for most consecutive games won.

When James Holzhauer isn’t making millions on Jeopardy! he’s a professional sports gambler. This is (probably?) one of the fastest-growing professions in America after sports betting has been legalized in states across the nation.

What exactly does the day-to-day life of a professional sports gambler look like? This is the subject of a recent interview in Sports Illustrated where James Holzhauer discusses how the special sauce gets made. From the mundane ‘wake up and look at odds’ to shopping around sports books for the best deals to everything else in between. Here are a few excerpts from the SI intervew:

Michael Shapiro: You’re introduced on Jeopardy! as a sports gambler. What does that entail?

James Holzhauer: So a lot of time went into the research and development of how to handicap games, but the day-to-day is often spent checking odds for different upcoming events. It’s not like the stock exchange where you get the best available price anytime you want to buy, here you have to shop around and find who’s giving you the best odds on the team you want to bet on that day. If a price will get better, I’ll wait to place my bet until it does. So that’s really the bulk of the day, doing the trading itself and staying up to date on news, too. If there’s injury news there’s very little time to react on the market before someone else does. (via SI)

It’s definitely a job that sounds cooler on paper than it does in execution. Especially when you factor on how there’s never a sure thing and you’re really hoping to finish the year with a slight margin of profitability in order to get by.

How does one get into a life of professional sports betting? James hit a big bet which gave him his bankroll:

JH: So in college [at Illinois] I was an online poker player and I also ran a poker strategy website where people would click through links to go sign up at online card rooms and they’d pay me online referral fees for that. And I played fantasy sports heavily in my college years, so the idea of analyzing numbers to see who would be the best teams and players the next year was already something I was doing anyway. So the idea that I could make some money doing this was a natural fit. I turned 21 in 2005 and the 2006 World Baseball Classic was a big event for me, I did very well on that. That season I bet a lot of baseball futures and won two big ones. I bet [Phillies first baseman] Ryan Howard would win the home run title at 40/1 odds and he did. I then got 100/1 odds on the Tigers to win the AL pennant and make the World Series and they did. That provided me with the bankroll to be more heavily invested moving forward into 2007. (via SI)

In the interview, he then goes on to discuss where he’s had the most success and his ‘go to’ types of best. James specializes in finding underpriced bets in the futures markets and he does this by rooting out the mathematical edge. He says he also specializes in halftime and in-game bets because the bookmakers have less time to refine the odds:

JH: One thing I specialize in is halftime and in-game bets. As a general rule, the less time a bookmaker has to set his odds the softer the odds are going to be. At halftime he has five minutes to put a line up whereas the line for the whole game has been up all week. If every time there’s a commercial break they’re putting up new odds, they’re going to make a mistake. If you’re playing attention you can clean up for sure. (via SI)

He hasn’t had any other jobs than ‘Professional Sports Gambler’ for now, not as an adult. And he then discusses how his life as a pro gambler has allowed him to absolutely dominate Jeopardy! in a way that’s never been seen before.

You should 100% check out the full interview on Sports Illustrated by clicking that link because he gets into some fascinating areas like what Jeopardy! records he’s trying to break and the mental block of betting on the show.