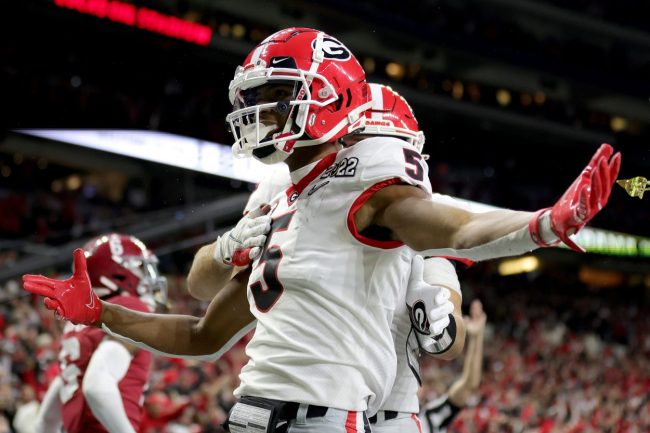 With just over eight minutes left in the College Football Playoff National Championship, Georgia wide receiver Adonai Mitchell absolutely MOSSED a Crimson Tide cornerback to secure the go-ahead touchdown catch. It was an incredible effort from the true freshman and was ultimately the difference-maker.

Mitchell, a three-star prospect who played his high school football in the Nashville area, almost did not play for the Bulldogs. In fact, if it was up to him, he would be at Tennessee.

After being born in Texas, Mitchell and his family moved to Antioch, Tenn. before his junior season and the 6-foot-4, 190-pound pass-catcher played for Cane Ridge as an upperclassman. He had offers from Baylor, Auburn, Boston College, Indiana, Arkansas, LSU and Texas, among others.

However, according to VolQuest’s Austin Price, he wanted to play in Knoxville for the Volunteers. He even filmed a commitment interview for UT’s Rivals site outside of Neyland Stadium.

But the interview was never released, because he didn’t end up committing. And not by Mitchell’s own decision.

Price says that former head coach Jeremy Pruitt didn’t accept his commitment. Allegedly, he didn’t want Mitchell because he is a diabetic.

Mitchell was even willing to reclassify to play at Tennessee.

Jeremy Pruitt had two chances to take Adonai Mitchell. Mitchell was open to re-classifying at one point and then he was slow played in the 2021 class before eventually blowing up. He’s putting on a clinic right now.

But Pruitt said no.

As a result, Mitchell committed to Ole Miss in April, but then flipped his commitment to the Dawgs in July. Now, just over a year after he enrolled in Athens, he is a national champion and played a big role in securing Georgia’s first ring since 1980.

And to think he could have been a Volunteer if it wasn’t for Jeremy Pruitt. Tough.