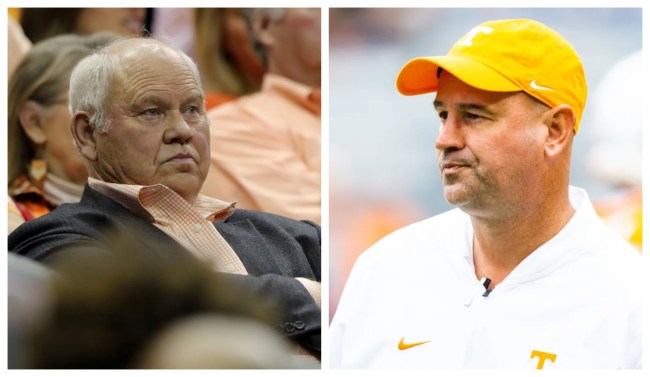 Jeremy Pruitt was fired as the head football coach at Tennessee back in January after a 3-7 campaign in 2020. A few weeks prior to his firing, it was reported that the program was under NCAA investigation for alleged recruiting violations and impermissible benefits given to former student-athletes.

With the NCAA investigation added to the mix, Tennessee was able to fire Pruitt with cause, which means he didn’t receive his $12 million buyout. Pruitt thinks he’s deserving of that money, or at least some of it, and he and his lawyer are now threatening a lawsuit against the university.

Michael Lyons, Pruitt’s attorney, sent a letter to the university on October 7, asking that both sides try to reach a settlement or a lawsuit may be on the horizon. The threat within said threatened lawsuit is that it would paint Tennessee in an even worse picture than it’s already in regarding NCAA violations.

Former Tennessee athletic director Phillip Fulmer, who announced his retirement the same day Pruitt was fired, had quite the response for Pruitt and his lawyer. It’s worth noting that Fulmer was the man who hired Pruitt as the Vols’ head coach.

“The days I interviewed each candidate for the head football coaching position at the University of Tennessee, including Jeremy Pruitt, I emphasized that you did not have to cheat to win at the University of Tennessee and that cheating would not be tolerated,” Fulmer told ESPN. “Jeremy has no one to blame but himself for his firing from UT. He had a great opportunity at a great university, and he simply screwed it up.”

Fulmer hired a bad football coach and was a bad athletic director during his three-year stint at the helm. If leadership at the university could go back in time, there’s no way they would choose to hire Fulmer as the AD back in 2017, but Fulmer is an icon in Knoxville.

The university, and most Volunteer fans, welcomed Fulmer with open arms thinking that he could bring back that 1998 magic back to Knoxville. Instead, the reality is that Fulmer made one of the worst hires in the schools’ history. Tennessee’s gameplan didn’t work out too well and now the university could be facing a lawsuit on top of an NCAA investigation.