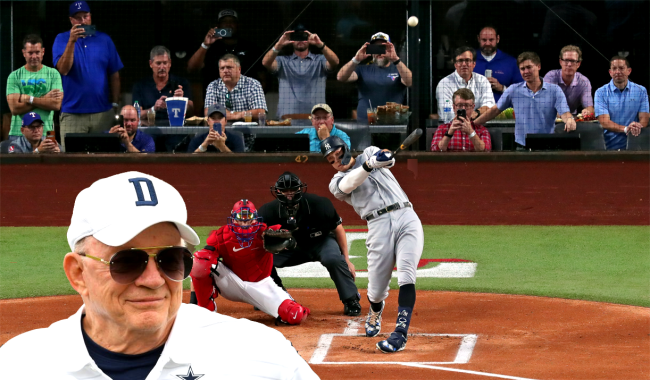 Much like he did when he was asked what he would have done with Tom Brady’s 600th touchdown pass football, Jerry Jones once again had a pretty great answer for what he would do if he had Aaron Judge’s 62nd home run ball.

Last October, after Brady threw TD pass number 600, he said, “I’d be hard to trade with. And I would explain to everybody that that’s, my, like asking for my baby. Then I’d tear up for him a little bit when I think about how I’m gonna have that when I’m 90. And then after all of that, then I’d take offers.”

The guy who actually did have possession of the football passed on a potential payday of up to $750,000 and returned the football to Brady. So, instead of all that cash, he received two signed jerseys and a helmet from Brady, a signed jersey and game cleats from Mike Evans, a $1,000 credit at the Buccaneers’ team store, and two season tickets for the remainder of last season and this season.

Fast forward almost a year to the day and Aaron Judge’s 62nd home run baseball is in the possession of a fan named Cory Youmans, the husband of Sports Illustrated’s Dallas Cowboys and Mavericks reporter Bri Amaranthus.

It has been estimated that the ball will be worth around $2 million if he decides to sell it.

So what would Jerry Jones do if he had the historical baseball in his hands?

“I think I’d like him [Aaron Judge] to have it, the player, at the end of the day,” Jones replied. “Now, if I didn’t have any money … so it’s all relative. Let’s be real a little bit here. Your personality, your charitability, that will change on you when you’re broke.”

Jerry Jones has previously admitted to being a big baseball fan

Back when he was discussing Brady’s 600th touchdown pass ball, he revealed that his number one prized piece of memorabilia is a baseball signed by Chicago Cubs Hall of Famer Ernie Banks.

Friday, after talking about the Aaron Judge ball, the show’s hosts asked Jones what team he rooted for as a kid.

“Well, first of all baseball was my love and playing it was, I still love it, and I got to travel, played American Legion, played all the all the way up through and and so I love baseball and just followed meticulously all the players that played it and I was in college when Maris and Mantle were
playing together and Maris broke the record, but I’m a great baseball fan.”

Jones continued, “I followed all the teams, followed all the players. I was really a player baseball fan more than a team baseball fan, but my part of the world in Arkansas you couldn’t go down a street in a subdivision or you couldn’t go down the street in just a street. and people would be sitting on the porch and they’d be sitting there in a chair and gathered around listening to the radio and listening to the St Louis Cardinals. It was just like
the the sun going down.”