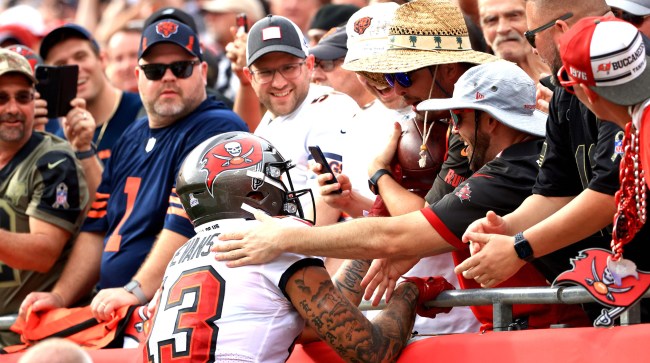 When Mike Evans of the Tampa Bay Buccaneers decided to celebrate with fans after scoring a touchdown in the first quarter against the Chicago Bears on Sunday by giving away the football, little did he realize what a serious mistake that was.

As every NFL fan knows very well by now, that particular football just so happened to be the one used to complete Tom Brady’s historic 600th touchdown pass.

Once the mistake was realized, a Buccaneers staffer went over to the fan to ask if he would return it back to Brady. He did, but what he ended up receiving in return paled in comparison to what many, including Tony Romo during the broadcast, thought he should have received for being so nice.

Related: People Were Mad At Tony Romo For Suggesting Tom Brady Give Up His Wife In Exchange For 600th TD Ball

One sports memorabilia expert believed that fan missed out on a potential payday of up to $750,000 by returning the football to Tom Brady.

The fan, Byron Kennedy, later told the media that all he really wanted in return for the ball was to play a round of golf with TB12.

Kennedy didn’t get that, but it was revealed that instead he received two signed jerseys and a helmet from Brady, a signed jersey and game cleats from Mike Evans, a $1,000 credit at the Buccaneers’ team store, and two season tickets for the remainder of this season and next season.

Brady added during the Monday Night Football “Manningcast” that he was also giving Kennedy a bitcoin worth around $63,000.

Not a bad haul when it’s all added up, but still nowhere near $750K.

On Tuesday, during his appearance on 105.3 The Fan, Dallas Cowboys owner Jerry Jones and the hosts talked about the transaction that took place around Tom Brady’s 600th touchdown ball.

“How would Jerry Jones negotiated giving that football back? Would you have turned and run out of that stadium if you were 20 or 30… a 20-year-old, or what would it have taken for you to give that ball back for Tom’s 600th touchdown?” Jones was asked.

“I’d be hard to trade with. And I would explain to everybody that that’s, my, like asking for my baby. Then I’d tear up for him a little bit when I think about how I’m gonna have that when I’m 90. And then after all of that, then I’d take offers,” Jones replied, cracking up the show’s hosts.

Jerry Jones was then asked what is the one piece of memorabilia that really is “his baby.”

“Later, in Dallas, I had this great looking gentleman come up to me, and I’ve had the Cowboys about 10 years, and he comes up and said, ‘Mr. Jones, my name’s Ernie Banks. I played shortstop, second base with the Cubs .’

“I said, ‘Ernie, I know you.’ I said, ‘Boy, it’s great to shake that hand’ and he said, ‘Well, it’s great to meet you,’ and I said, ‘We’ve met before’ and he said, ‘No, I would have said that, Jerry.’ I said, ‘No, we’ve met before,’ and I told him and I said, ‘Ernie, I have a baseball, it’s never even hit the carpet, I’ve had it sitting with me for all of these years and I’ve never taken my thoughts off of the fact that that’s Ernie Banks on that baseball.’