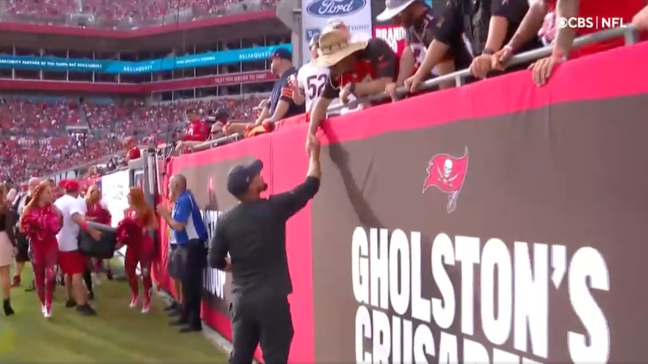 Tom Brady made history on Sunday, again. During the first quarter of Tampa Bay’s game against Chicago, the greatest quarterback of all-time looked to his right and fired a bullet to Mike Evans for the Buccaneers’ third touchdown of the game.

More importantly, it was the 600th touchdown of Brady’s career, making him the first NFL quarterback to reach that mark.

In celebration, Evans ran to the stands and handed the football to a fan in the front row. He did not realize that he was just a part of history and thought that he was doing a nice thing for one of his team’s supporters.

Instead, he gave away the first player to ever throw 600 touchdown’s 600th touchdown. Evans was informed of the mistake on the sideline and clearly had no idea.

Meanwhile, a team staffer or equipment manager had to run over to the fan and let him know what just happened, asking for the football back. It took the staffer the entire commercial break to get it back in his hands, but eventually, the fan came to an agreement.

Although it is unclear as to what that agreement is, I’m sure that we will find out. On the call for CBS, Tony Romo suggested that in return for the football, the fan get $1,000,000 or a date with Brady’s wife Gisele Bündchen.

Here is the exchange between the fan and the Bucs staff member:

The Bucs had to negotiate to get Brady’s 600th TD ball back from a fan 😂 pic.twitter.com/31WAjBJVfU

What would you want in return for Brady’s 600th touchdown?!