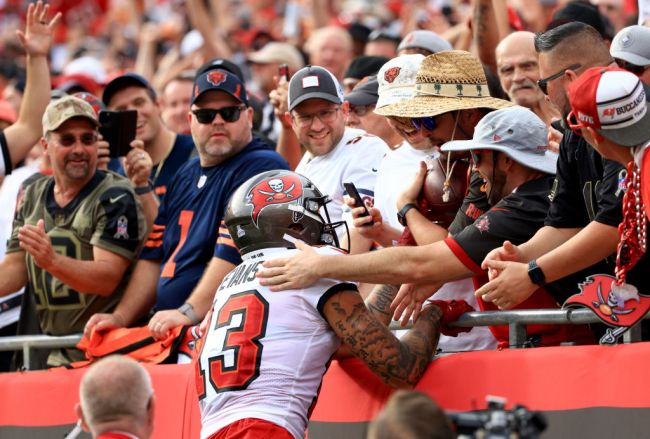 The Bucs fan who gave back Tom Brady’s 600th TD ball may have missed out on a big payday.

During Sunday’s Bucs-Bears game. Bucs wide receiver Mike Evans accidentally handed Brady’s 600th TD ball to a fan in the stands. The Bucs were able to convince the man to give back the ball for another ball and a $1k gift card.

In addition to the replacement game ball, the Bucs gave fan Byron Kennedy a $1,000 gift card to their team store for returning the ball from Tom Brady’s 600th career touchdown pass …

Sports memorabilia experts have weighed in on the value of the ball and it’s in the six-figure range.

Ken Goldin of Goldin auctions believes the ball would easily sell for $500k.

Fan gets Tom Brady’s 600th TD ball after Mike Evans handed it to him not realizing what it was.

The Bucs staff came over to ask for it back and fan complied.

Just spoke with @KenGoldin of @GoldinAuctions. Said the ball is worth $500,000 at minimum.

Ezra Klein of Collectible.com believes the ball is probably worth closer to the $750k range.

ra Levine, CEO of the sports memorabilia investment platform Collectible declared the ball worth “easily $500,000-plus” and probably “closer to $750,000.”

After the game, Brady promised to give the fan ‘something nice” for giving back the ball.

Tom Brady on the fan giving him back the ball on his 600th TD pass: "He's gonna get something nice in return…"