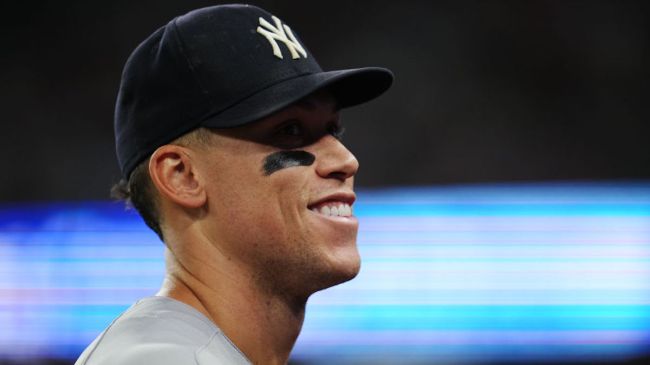 After what felt like weeks of anticipation, New York Yankees outfielder Aaron Judge hit his 62nd home run of the season on Tuesday night, setting a new American League record.

While Judge’s historic slugging this season has led to a constant debate about who the “true” home run king is, the one thing that cannot be disputed is that Judge, who has always seemed like a guy who just *gets it*, deserves whatever plaudits and dollars come his way, especially considering how surreally chill he’s being about the fate of the home run ball.

Aaron Judge would like his 62nd home run ball back but is fine with the fan keeping it: “They’ve got every right to it”

Speaking to reporters following Tuesday night’s career highlight, Judge said that while it’d be “great” to get his 62nd home run ball back, it’s ultimately a “souvenir for a fan… and they’ve got every right to it.”

“I don’t know where it’s at, so we’ll see what happens with that. It’d be great to get it back, but that’s a souvenir for a fan, so, you know, they made a great catch out there and they’ve got every right to it,” Judge told the media on Tuesday night.

Aaron Judge says "it would be great to get" his 62nd home run ball back, but ultimately it's up to the fan:

"That's a souvenir for a fan. They made a great catch out there and they have every right to it" pic.twitter.com/7qogQyqO4E

Judge’s decision to let the fan keep the historic souvenir comes just a few weeks after future Hall of Famer Albert Pujols did something similar with his historic 697th home run ball.

“It’s just a baseball. They deserve to have it. It went out of the ballpark,” Pujols said about the decision to let a fan keep the 697th home run ball. “We play this game for the fans. So whether they want to give it back or they want to keep it, I don’t have any problem with that. “I think it means for that girl more than me having it in my trophy case.”

The Yankees have one game left in the regular season — Wednesday against the Texas Rangers at 4:05 p.m. — giving Judge one last chance to tack another home run or two onto his record.