Albert Pujols Let A Grieving Fan Keep His Historic 697th HR Ball: ‘They Deserve To Have It’ 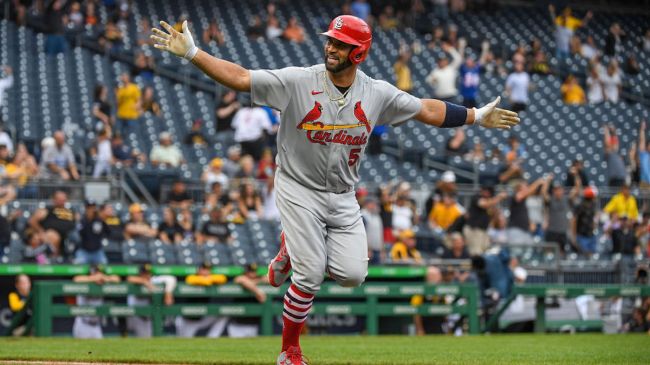 While most American sports fans were likely watching NFL kickers ruin their bets for the first time this season (Rodrigo Blankenship, I’m looking at you), something rather historic unfolded in the baseball world on Sunday, as St. Louis Cardinals legend Albert Pujols smashed his 697th career home run, moving him about Alex Rodriguez for 4th all-time on the HR charts.

Given the significance of the home run, one would assume that Pujols would’ve wanted to keep the ball for his own personal collection of trophies and milestones. The 42-year-old slugger, though, displayed an unreal example of class by allowing a grieving Pittsburgh Pirates couple — Matt and Samantha Brown — to keep the ball.

In addition to the historic home run ball, Pujols also signed another two baseballs that he gifted the couple, who were at the game on the one-year anniversary of Samantha’s father’s death.

Speaking to reporters following the game, the future Hall of Famer explained his decision and highlighted that the game is ultimately played for the fans:

“It’s just a baseball. They deserve to have it. It went out of the ballpark,” Pujols said about the decision. “We play this game for the fans. So whether they want to give it back or they want to keep it, I don’t have any problem with that. “I think it means for that girl more than me having it in my trophy case.” [via MLB]

Given that Pujols has confirmed this will be his final season in the big leagues, it’s unlikely he smashes another 17 home runs over the next few weeks to tie Babe Ruth for third place at 714 bombs.