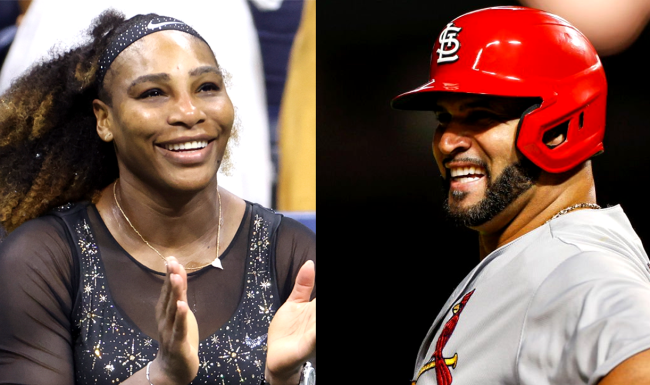 Albert Pujols homered on Monday. Serena Williams won her US Open match on Monday, August 29th. Just like they each did 21 years ago to the very day.

But wait… it gets even weirder than that.

On August 29, 2001, not only did Pujols homer and Serena win, Vladimir Guerrero Sr., Craig Biggio and Dante Bichette all recorded a hit.

On August 29, 2022, Vladimir Guerrero Jr., Cavan Biggio and Bo Bichette (the sons of the three aforementioned players, who all also happen to play for the Toronto Blue Jays) also record a hit.

We live in a repeating simulation. Thanks for confirming.

Back on August 29, 2001, Serena Williams was the 10th seed at the US Open. (Yes, that’s how long ago this was.) On that day, she defeated Denisa Chladkova of Czechoslovakia 6-1, 6-1 in the second round of the tournament. She ended up losing to her sister Venus Williams in the final.

That same day, Albert Pujols, a 21-year-old rookie, hit his 31st home run of the season off San Diego Padres pitcher David Lundquist in the eighth inning with two on and two outs. The Cardinals would win the game 16-14.

Also playing in that game were Jim Edmonds, J.D. Drew, Bobby Bonilla, Phil Nevin (now the manager of the Angels), Rickey Henderson, and Ryan Klesko. Klesko was accused of corking his bat by the Cardinals in that game after homering off Cardinals closer Dave Veres.

Dante Bichtte was in the final year of his career, playing for the Red Sox. He went 3-for-4 that day with a double. His son, Bo Bichette went 1-for-4 with a walk 21 years later.

Craig Biggio was in his 14th season of playing for Houston. He went 1-for-1 with three walks versus the Reds. His son, Cavan Biggio, went 1-for-3 with a double and a walk for the Blue Jays on Monday.

Here another fun sport fact about those dates, 21 years apart.