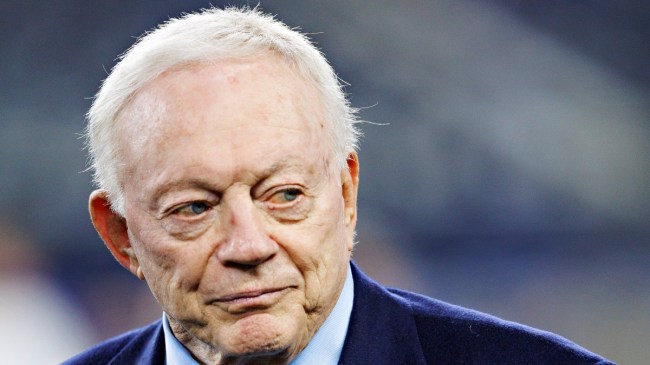 Jerry Jones and his son Stephen Jones have canceled their weekly interview on the Dallas radio station 105.3 The Fan, according to the station’s official website.

As their official announcement of the cancelation notes, “Jones and his son, Cowboys EVP Stephen Jones, join our radio station twice a week — Jerry joins us every Tuesday and Friday, while Stephen comes on Mondays and Fridays.” According to 105.3 The Fan, they do not know why Jones canceled the scheduled interview.

Following the 19-12 loss in the NFC Divisional Round to the San Francisco 49rs, Jones seemed to indicate that head coach Mike McCarthy’s job was safe. Given how both the media and fans have been crushing the Cowboys in the wake of their embarrassing loss, though, perhaps his always-mercurial mind is changing.

“No,” Jones said on Sunday when asked if the loss changes his mind about McCarthy.

“No, not at all. And their decision for our kicker was exonerated with his field goal, in my mind, and I’m proud for him. But this is very sickening to not win tonight.

Regardless of what ultimately happens with the Cowboys’ coaching staff, the onus to improve is going to be on quarterback Dak Prescott, who threw two crucial interceptions during the loss to the San Francisco 49ers. In addition to the two picks in the NFC Divisional Round game on Sunday, Prescott threw an NFL-leading 15 interceptions despite missing five games due to injury.

The Cowboys’ staff will likely look different next year regardless of whether or not McCarthy keeps his job, as defensive coordinator Dan Quinn is one of the leading candidates to land a head coaching job this offseason.