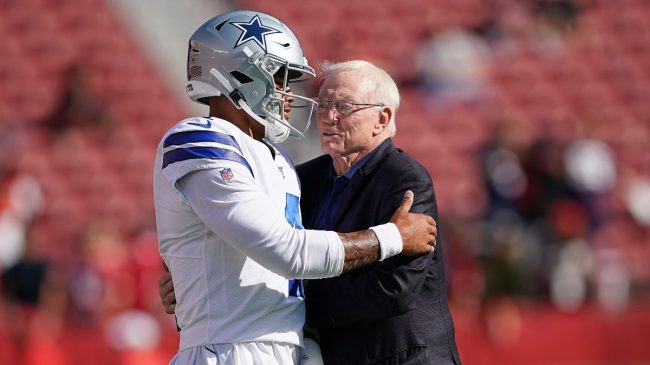 Following their recent loss to the Jacksonville Jaguars, some questions are being asked of the Dallas Cowboys, who just haven’t looked all that formidable in recent weeks.

One area of concern for the Cowboys is at quarterback, where Dak Prescott’s 10 interceptions since he returned from injury represents the highest total in the league over that span. In fact, according to ProFootballTalk, Prescott has thrown interceptions on 3.9% of his passes this season, which is the worst rate of his career.

While speaking to the media this week, however, owner Jerry Jones sounded like he still had all the faith in the world in Prescott, who he believes playing “outstanding” over the weekend despite the fact that he threw a game-ending pick-six (which, to be fair, wasn’t entirely his fault).

“We can win with him playing like that to be trite. I thought he played outstanding. As we see, he wasn’t playing against chopped liver out there. And, so, I thought he did play really well. I thought he made good decisions. Overall we can — if he plays like that, we can win most games,” Jones said.

“Certainly those interceptions can neutralize great execution and effort in other parts of the game. And that’s being trite. I can tell you right now the definition of aggressiveness does not have to include turnovers. Aggressive does not. And I do like aggressiveness without turnovers.” [via Dallas Morning News]

What Jones’ comments make light of is the fact that they aren’t paying Prescott for him to “play like that” — he’s supposed to be the *reason* the team wins, not just a cog in a machine that needs everything else to function properly.

Through nine games this season, Prescott has completed 68% of his passes for 2,103 yards, 17 touchdowns, and 11 interceptions.

To close out the 2022 season, the Cowboys — who are currently the #5 seed in the NFC playoffs with a 10-4 record — will take on the Philadelphia Eagles, Tennessee Titans, and Washington Commanders.