Jerry Jones Continues To Play Hardball With Ezekiel Elliott, Admits That ‘Zeke Will Miss Games This Season’ And Says He Doesn’t ‘Negotiate With Players’ 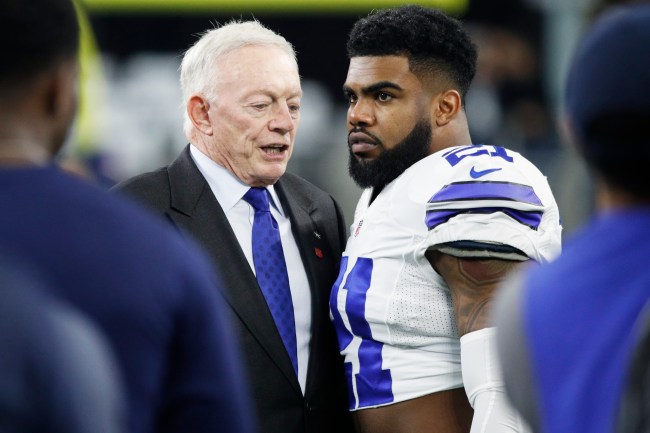 It seems like Jerry Jones is going to let the Ezekiel Elliot holdout to going to into the season.

For the past month or so, Elliott has been holding out while trying to renegotiate his contract. The Cowboys have maintained that they offered Zeke a very lucrative and fair offer.

Back in Oxnard for #Cowboys camp today and Wednesday and a few new details on the contracts front. I’m told the team has “generous” offers on the table for their QB, RB and WR. Putting each one in the top 5 “highest paid” at their positions.

According to one report the Cowboys are willing to make Elliott the second highest-paid running back in the league.

Sources: The most recent offer in negotiations between holdout Ezekiel Elliott and the Cowboys came from the team. Elliott has been offered a contract making him one of the NFL’s 2 highest-paid RB. That would suggest team offering more than LeVeon Bell and less than Todd Gurley.

Elliot’s social media activity suggests that he once to surpass Todd Gurley as the highest-paid back in the NFL.

Ezekiel Elliott retweeted a @joethomas73 tweet emphasizing that if you’re the best at your position then on your second deal you should beat the highest-paid at it by 15-20%.

Todd Gurley is the highest paid running back in the NFL. He’s paid $14.375M per year. pic.twitter.com/PtIa7dp0gQ

After the Cowboys final preseason game tonight, Jones spoke to the media and admitted that he’s accepting the fact that Elliott is going to miss games.

Jerry Jones on Ezekiel Elliott: "I'm operating as though right now he's going to miss regular season games. My entire expectation for what we're putting together as a team right now would anticipate with him holding out … that he's going to miss games. I just accept that."

Jerry Jones tonight: "Let me be real clear about something, I don't negotiate with players. I share with players my thoughts about our team and about why I have the position I have. And I give them information as they're assessing their decision."

Jones did tell the media that the Cowboys need Elliott and that he will be back this season.

Jerry Jones talking about the Cowboys' team identity, mentioned Ezekiel Elliott: "He's a lot of what I'd like to be part of our identity. And has been. I'll always remember him jumping in that red kettle. That's him in that locker room. And of course the player that he is."

Does the possibility of not having Ezekiel Elliott to start the season change Jerry Jones' expectations for this Cowboys season?