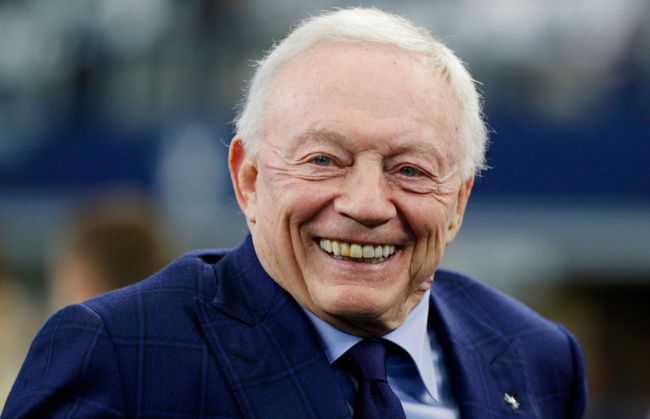 For better or for worse, Dallas Cowboys owner Jerry Jones has never been one to shy away from the spotlight and is usually always willing to face the media, whether it be following an epic Cowboys victory or a heartbreaking loss.

Jones stayed true to form following the Cowboys’ 23-17 home defeat to the San Francisco 49ers in Sunday’s Wild Card game, as he took the time to speak to reporters about the result of the game and Mike McCarthy’s future as the team’s head coach.

Given the sloppiness the Cowboys played with — they had 14 penalties in the game and were the league’s most penalized team during the regular season — McCarthy’s future, which was a talking point all season, has obviously come into question following the loss.

“I don’t even want to discuss anything like that at this particular time. No discussion about anything,” Jones said when asked about making a coaching change in the offseason.

“I’m not going to discuss coaching, preparation, any of those things. That is not on the table.”

In addition to discussing McCarthy’s future, Jones also discussed the Cowboys’ Super Bowl window, claiming that when you’ve got the sort of talent that this team does, you need to succeed:

“When you get this combination of players together, you need to have success. We all know how it goes in the NFL, the whole thing is set up to take away from the best and add to the ones that need improvement. And personnel-wise, I think we’ve got one of the best.”

With their victory over Dak Prescott and the Dallas Cowboys, Jimmy Garoppolo and the San Francisco 49ers have advanced to the Divisional Round of the playoffs and will take on the top-seeded Packers in Green Bay next weekend. Super Wild Card weekend will wrap up on Monday night with an NFC West matchup between the Los Angeles Rams and Arizona Cardinals, with the winner set to take on Tom Brady and the defending Super Bowl champion Tampa Bay Bucs.