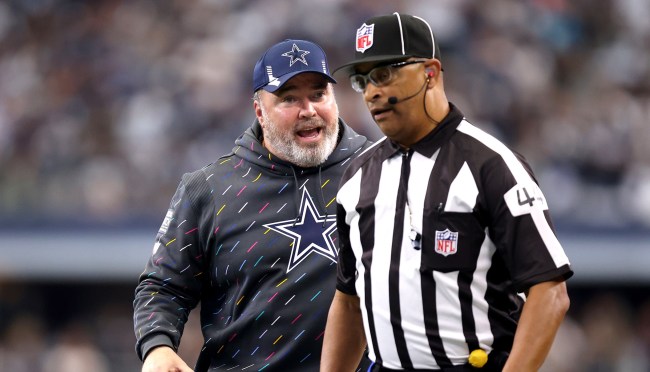 This past Sunday pretty much every Dallas Cowboys fan in the land believed that their team got hosed by the NFL officials working their game against the Arizona Cardinals.

Numerous Dallas players, including Dak Prescott, CeeDee Lamb, DeMarcus Lawrence and Randy Gregory all complained about the officiating after the Cowboys’ 25-22 loss.

“Playing against the refs again, like usual. It seems like an every week occurrence. We just have to tune that out and just deal with it,” Gregory said after the game.

“I think the result said that we’re still a good team. Even though we was facing two teams tonight, the results ain’t come out like we wanted them to,” said Lawrence.

The Cowboys’ team owner, who was a part of the decision making process that made all of the NFL’s full-time officials part-time employees again back in 2019, wasn’t nearly as worried about the refs.

Speaking to 105.3 FM the Fan on Tuesday about Sunday’s officiating and whether making the officials full-time employees would help, Jones said, “Well, you just don’t have enough support to have the conclusion that full-time would remedy the issues that we’re complaining about.

“So I’ve never been convinced, me personally, that a part-time official that’s spending some of his time engineering wouldn’t be better than a full-time official. We’re talking about 17 games, the playoffs, nothing has convinced me that there would be that kind of an advantage. Matter of fact, you might have less quality.”

Needless to say, NFL fans responded to Jerry Jones’ comments with a collective “What?”

So you’re saying someone who’s FULL TIME Job / Career.. who can 100% dedicate themselves to the craft so to speak won’t be better than someone who has a different career and officiates “part time” as a side gig?!….. pic.twitter.com/0ZyPs890kL

He left out the part where he said the NFL REALLY doesn't want to make these guys full-time employees.

This is just ridiculous nonsense. A successful lawyer or CPA does not automatically make a better NFL official. Officiating should not be a side hustle.

That man really can BS with the best of them... That was some next level word soup

TIL that the best person at playing a cello in the world could be an NFL referee just because they are the most accomplished in their profession. They not only need full time referees they need to realize the speed of this game is beyond humans and start using technology.

Literally the only solution to ref mishaps is giving them more practice and training in the off-season. That means making them full time employees, which means Jerry and the other owners will have to pony up the cash.

For what it’s worth, Jerry was echoing his son Stephen Jones’ comments on Monday regarding the refs, when he told 105.3 FM the Fan, “Yeah, I’m not concerned about the officials. Every team deals with officials.”

Which, I guess, makes it all right that they are bad. Or something.